Midline & Veer in the Pistol Offense 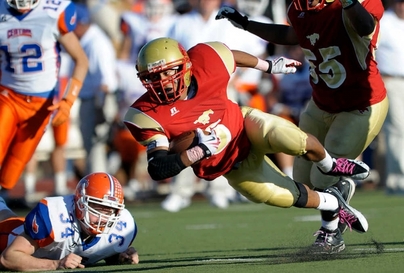 The midline and inside veer are not new concepts. They have been run by many great coaches for many, many years. We do not claim to have invented any of what I am going to talk about. What I will claim is that we figured out how to fit them into the structure of our pistol offense.

Back in 1999 we began experimenting with the spread run game from the gun. I was coaching at a large high school in the Bronx, New York. We were based out of the I formation, running what we called a multiple option offense. We were facing 8 and 9 man fronts. We had taken over a program that had lost 27 straight games and had never been to the playoffs. Our head coach at the time, David Diaz, understood that we had to keep things very simple as we tried to right the ship. In our first year we went 6-4 and made some progress. While we were very effective running ball, we needed to do something to spread the defense. We didn’t have the kids to match up against the better programs. The answer for us was incorporating some spread concepts from the gun.

Back in 2000, not many teams were running the gun. We were the only team in our area running the zone read. In the beginning, we enjoyed success because people didn’t have an answer. As we began to run more and more of our offense from the gun, we found that teams were beginning to play games to side we set our back. This caused us some issues when we played top-ranked teams. Also, we were still getting under center to run our traditional option and downhill run games. While we thought we were diverse, we were actually very easy to defend. There was very little diversity. We also weren’t able to run all of our option concepts consistently from the gun.

One night we were brainstorming, and we found the solution. If we placed the back behind our quarterback, teams could no longer game our zone read concepts. Our offensive line coach at the time, Chris Harris, also brought up that we could run all of our traditional I plays from the pistol. From our “pistol” concept, we were able to marry our traditional downhill run game, option game, and spread runs. And, our quarterback had depth in the pass game. This helped our protection schemes.

Within our structure, we can run our one back sets, two back sets, and three back sets from the pistol. We can essentially go from 3 backs to empty with any personnel group. We can use a fullback or tailback type as the pistol back. Sometimes we have our pistol back in a 3 point stance, sometimes he will be in a two point. The versatility of the pistol allows us to be very diverse on offense. But, diverse does not mean complex. The beauty is that the complexity is in the simplicity.

We had been running midline and inside veer from the I formation and we found they fit well in our pistol package. When we started running the pistol, we had only the inside zone concept that attacked the middle of the defense. While the inside zone is a great concept, we wanted to add an option concept that forced the defense to reduce their front. Our goal is to get our best athletes the football in open space. Because we have had success on the perimeter, defenses tend to spread out to protect our alley runs. The midline and inside veer have helped us tremendously in taking advantage of the middle of the defense.

The backfield footwork for midline is pretty straight forward. Our pistol back has 1 major rule. He owns the line. The line runs right through the middle of the center’s back. The pistol back must stay on the midpoint through the mesh. The quarterback will push shallow to lose a half yard of depth, and pivot to get off the line. We tell him push away, step at 6. We want him to reach the ball deep and shuffle as he rides the dive back. The quarterback’s eyes are on the read. If the read player attacks the dive, the quarterback will pull the ball and replace the read. If the read player does anything else, we give the ball. Figure 1 illustrates the mesh.