The 3-4 defense can have a variety of appearances; therefore, it is important to first identify where the defenders are lining up and how they are attacking your offense.  Running the triple option/midline, we are always trying to put ourselves in an advantageous position by using a variety of formations and motion to help us gain a numbers advantage.  Seeing how defenses align to simple formation adjustment can give the offense the upper-hand.  Regardless, it is important for the quarterback to identify the dive and pitch reads before the snap.  Equally important is for the play side halfback and wide receiver to identify the primary and secondary force defenders and to communicate so two people are not blocking one person.  Many teams have played a 3-4 against us because we run midline very effectively and they think having a NT will prevent that from happening.  Being able to execute a multitude of option attacks can help provide answers when teams try to take away the midline or inside veer.

In Diagram 13, there is an image that displays how we block a 3-4 defense and whom we are trying to option.  Our backside G and T are scoop blocking to protect against an angle from the NT, blitz from BSLB, or a pinching backside end.  The C and play side G are going to combo the NT up to the backside LB (if the LB is gone, work up to the safety).  The play side T will release inside, making sure to rip with his outside arm to negate the DE from getting his hands on him allowing him to get the play side LB.  I teach the quarterback to envision a clock at his feet, so he should have a first step at 4 o’clock (3 o’clock is obviously a lateral step) and to draw the ball back as quickly as possible to get the ball into the FB’s belly while keeping his chin on the front shoulder.  By doing this it forces the ball back and keeps the quarterback’s eyes are the predetermined dive read.  The quarterback must decide (whether to give or keep) by the time the ball reaches his front thigh then immediately get eyes up to the pitch read (practicing meshes and different mesh defenses every day is crucial to being successful).  The front side wide receiver is responsible for the secondary force and must take a good angle to attack the safety.  The play side running back is going to arc release and block the primary defender (it is beneficial to come up with some sort of simple hand gesture, so the two players can communicate and block the correct defender).

A common defense to this is to pinch the DE (or place him in a 4-technique) to prevent the play side Tackle from getting to the LB, leaving him unblocked and able to scrape over the top for tackles.  Therefore, we have our Tackles make a “zone” call (if they cannot release inside) to signify to the guard he is going to outside release to block the LB (if taken by the G he will climb to the safety).  The play side guard must take a play side zone step up to the LB and the C must also take a play side step to get his head in front of the Nose Tackle. 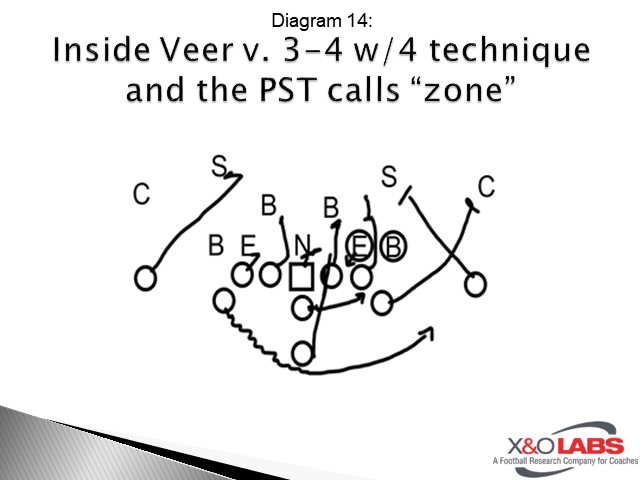 To study game film of the Inside Veer concept, click on the video below: