In the 2017-2018 offseason, we decided as a coaching staff that we needed to go in a different direction offensively. I had just finished my first season as the head coach at Francis Parker and to say that we struggled to move the ball would be putting it politely. We couldn’t drive the ball, we hardly made any explosive plays, and our team only scored over the 20 points twice in 10 games. While some of that could have been attributed to a young team, the reality was that we had done a poor job of putting our players in the best position for them to have success.

At Francis Parker, we are a small team, both literally and figuratively. As a small school (250 boys) that offers a full variety of sports, our program numbers are typically in the mid-30s for grades 9-12. Additionally, while our kids do a great job of training to build strength and speed, we will go into nearly every game on our schedule as the undersized team. In 2019, our roster had only 3 players who weighed in at over 200 pounds.

It was the combination of all those factors that led us to the flexbone offense. While there are numerous advantages to running the flexbone, the ones that have made the biggest difference for us are:

In the spring of 2018, we did a deep dive and began studying several teams at both the high school and college levels who have had success running the offense. We then spent the remainder of the offseason working as a staff on the best way to build, package, and install the offense so that it would transform from just a series of plays into a system that our players could execute with speed and precision on a weekly basis. This is where I believe we have seen our biggest advantage of the offense.

The flexbone is unique.  While several teams will run certain plays that you may see from a traditional flexbone offense (Veer, Midline, Trap, Belly, etc.), there are only a few in our section who run the entire gamut of the offense. This has provided us two advantages that I believe have made us a very tough team to defend:

One of the most common strategies that we will see from our opponents is for teams to spin their safeties once we motion one of our slots.  They are usually doing this for 1 of 2 reasons.  Either they are looking to be able to force the ball faster and set a harder edge on the perimeter, and/or they want to put their pitch player into a better position to play his option responsibility.  This is especially common for teams that base out of a two-high coverage structure. 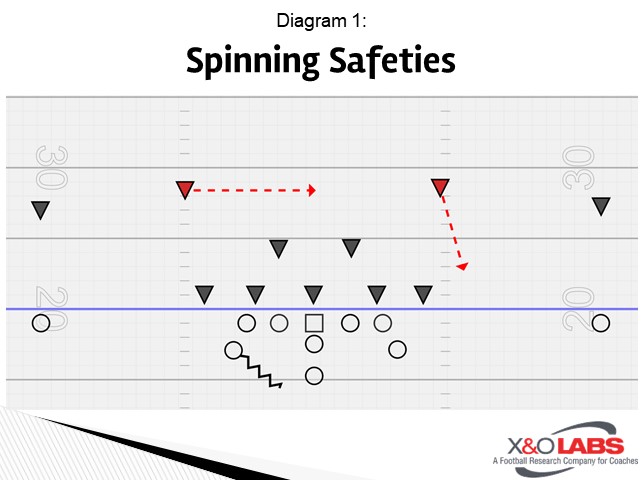