Combating Gap Exchange with the Option

One of the more common defensive adjustments to zone read teams is known as a gap exchange- the most common being a first level and second level defender.  According to Norcross, these were the most common counters defenses would have against zone read concepts.  Many defenses would tighten the alignment of their defensive ends to allow them to squeeze down blocks while second level linebackers can scrape over the top to play the QB (Diagram 16).  Norcross recounts a time that Nevada encountered this exact problem when playing Boston College in a bowl game a couple years back.  “We could never get our Tackle down to block the play side inside linebacker,” said Norcross.  “So we told the Tackle to block him so our slip guy could block the play side inside linebacker (Diagram 17).  The alley player would be free.  So we ran our arc scheme to the Tight End side so we didn’t need to run the ball at the Tackle. We basically man schemed the back side (read side) of the play. Our Tackle was responsible for him so we can take our tight end/wing back on the alley player. 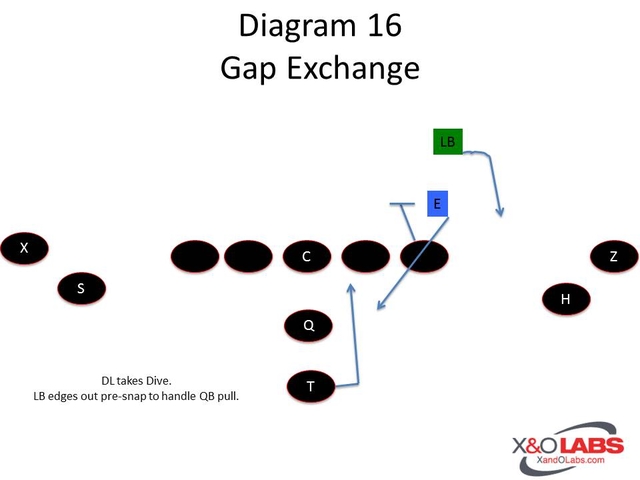 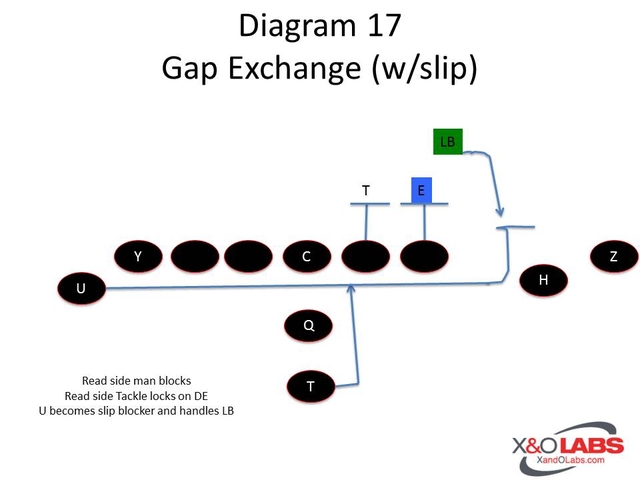 This became the birth of what is known as the “lock” concept for zone read teams.    Lock is an answer for teams that scrape with linebackers.  Lock would be a call given by the Tackle (or from the coaches in the booth) if teams see a tight alignment by the C gap player or perhaps the second level linebacker cheating a bit outside.  “Teams are having their DE crash and play the A gap, with their LB as the C gap player and the 3-technique being the B gap player,” said Norcross.  “ When you lock it, the DE can’t be the A gap player, the LB still thinks he’s the C gap player but you have no one in the A gap.   We got a bunch of folks like that.  It was basically dive to the back (Diagram 18).”    Bruce Barnum, the head coach at Portland State University will even get his offensive Tackle to flash his hands (to simulate pass) in order to confuse that read key.  “We will have our Tackle go right now, or he may even flash his hands to the DE to show him pass and then go get B gap defender.  You can play so many games with that poor guy.  I need to know who is taking the dive and who is taking the QB.  I’ll watch it each time in case you’re going to change it up.” 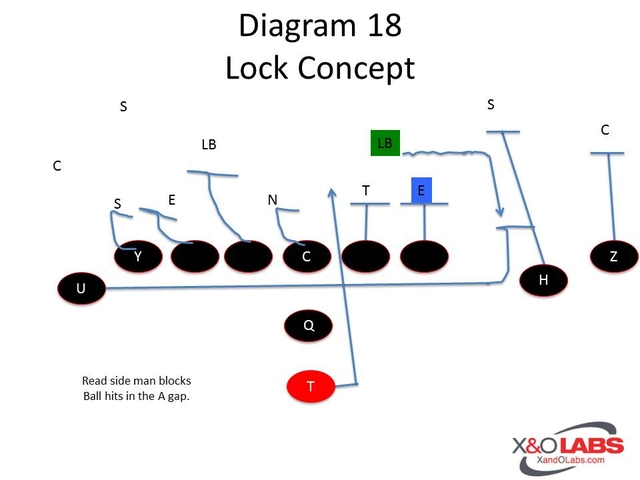 The same thing can be done to the Tight End side, or what Nevada calls the “master lock” concept, which is a call that would be made from the sidelines when Coaches could see the backer cheating over the top.  In these situations, the Tackle can’t get down on the three-technique because the play side linebacker is out immediately.  So, lock becomes the read (Diagram 19).  If they are in a 4-2 look and we would be reading that inside linebacker, he would arc to the outside linebacker.  He just had to know whom we were reading.   He would read the backer once he sees him fading out hard. We would carry it in every game particularly if we had trouble getting to that backer.  The Tackle is on the DE, the Guard on the DT while the front side is blocked he same.  Guard and Tackle are locking on the down lineman (they are fanning it) they become man.  The read goes from the DE to the inside backer now.  If we blocked the Tackle down, we would have two read keys- the end and the backer.  Lock means the offensive line locks on the defensive line.  The only thing we take away is the Tight End on his arc block. If we were in slot, we wouldn’t run it to the weak side because we would have a player spitting the difference between the Tackle and number two. “