We are a Flexbone team that majors in Inside Veer, Outside Veer, and Midline. In 2019, we made the switch to the Flexbone from the Pistol Spread (we were 9-22 in three seasons in the spread, 9-2 this past season in the flexbone). We are a little different in our Flexbone system. We use a TE almost every play, use lots of different formations/backfield sets, and utilize some gap schemes to get our slots involved in the run game. Our top concept in 2019 was Outside Veer, but in our transition process, we were able to incorporate several gap schemes to complement our option scheme. This made the transition easier for our players. We found that less is more with our gap scheme plays. We want to keep things simple and similar. We want to carry over in all our schemes, so it's easier for us to teach and our players to execute. Our top three gap scheme plays were a combination power/iso play we call Blast, Blast Counter play off of rocket motion using the same blocking as our Blast play, and Trap. 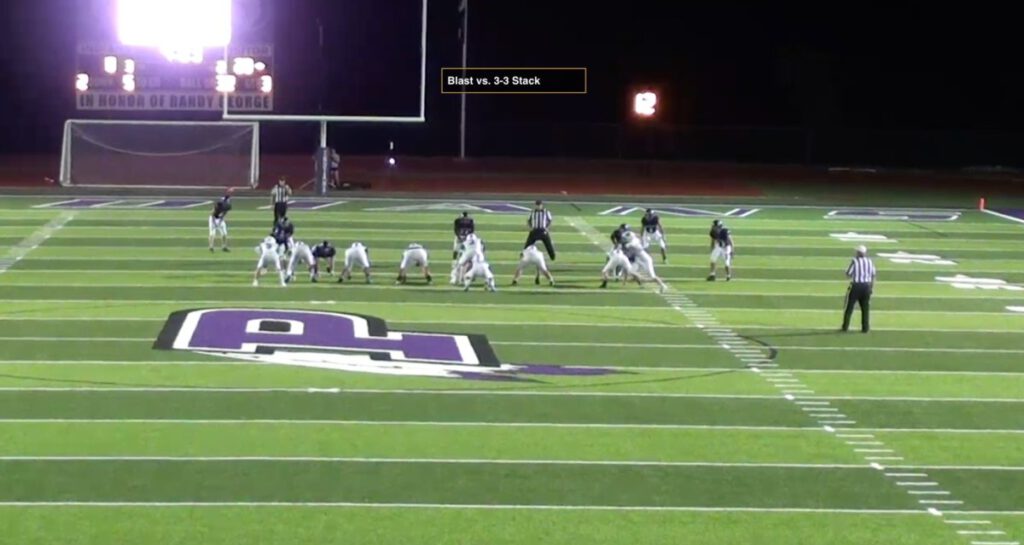 Blast has been our top play for the last 4 years. We kept the play in our scheme as we moved to the flexbone. While Inside/Outside Veer is our bread and butter play(s), Blast is our attitude play. It gives us a play where we can come off the ball and play smash-mouth football. This play is a combination of iso and power. We don't have huge B Backs (fullbacks) that can kick out big defensive lineman consistently. By blocking the play the way, we do, we can get a favorable matchup of our fullback on a linebacker. Our offensive linemen are also not huge kids. We average about 220 upfront and usually are smaller than the teams we play. This scheme gives us the ability to use the defender’s alignment against him.

We categorize our run game blocking rules. For our gap scheme, our playside linemen rule is to work Gap- On - Down. We will fan or turn out on an outside shade. This gives our undersized lineman an advantage because they can use the defensive lineman alignment against them. We just want them to get off the ball and take the defensive lineman where they want to go. We have our lineman step with their inside foot first, to prevent defensive linemen slanting across our face. Our center will block the first defensive lineman On - Back. He will replace the pulling guard. Backside our guard will pull around working for the first open hole. He blocks the first linebacker head up to his inside. Our backside tackle and tight end will scoop their inside gap. Our offensive linemen make line calls every play and communicates defensive alignment. We always give our backside guard and center the freedom to make an Ice call. This call tells the backside guard not to pull. We do this when we don’t feel comfortable with the look we are getting. In this case, the play becomes Iso.  We also can make a call where all the linemen block down, making the play basically Power. By using the blocking scheme and using tags we can get more bang for the buck. This is what we want out of our complimentary plays.

Our fullback will run his inside veer path and block the first linebacker head up to the outside. The playside slot’s rule is fan or fold. We give him the option to choose the best path for him to get the outside linebacker or force player blocked. Both of these players in our offense are usually 160 to 175 pounds. They rely on angles and quickness to make these blocks more than sure power.

For our mesh on Blast, our backside slot takes 3 motion steps, drives off his outside foot and dives at the crack of the playside guard. We tell him to run to green grass. We don’t want to over coach this point. Our quarterback will reverse out, take two steps at 6 o’clock, and put the ball in the belly of the slot. He is supposed to boot after the handoff. Our WR rule is to block the near deep defender or TD Alley.

This past season we averaged 4.2 yards a carry on this play. It was a great compliment to our Veer scheme and gave us an easy way to get the slots the ball. Also, it gives our quarterback a play off from having to make reads or decisions.