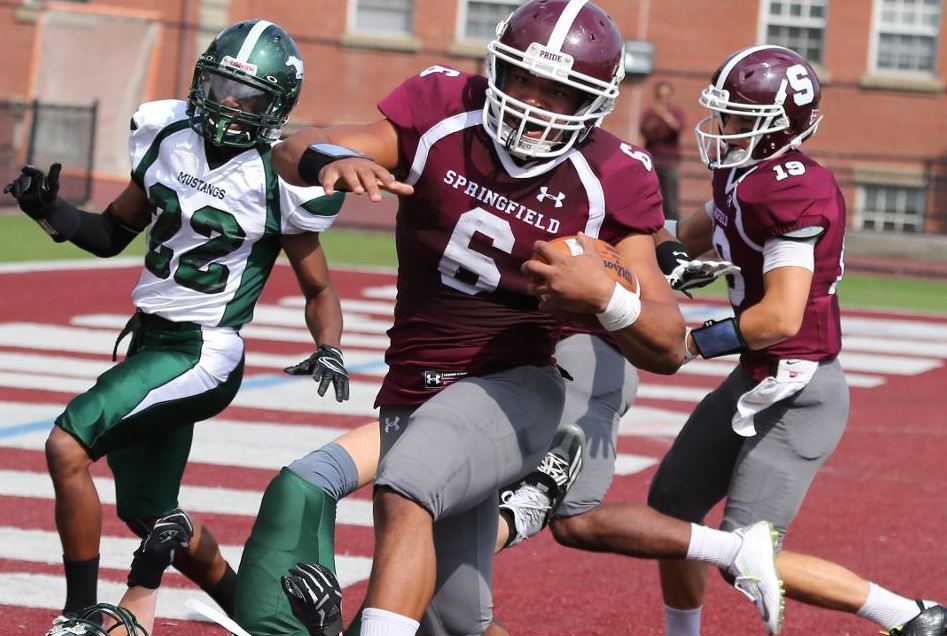 The perimeter count is the key to our option attack. It enables our skill positions to communicate in a concise, quick and effective manner. Regardless of the look the defense throws at us, if we follow our rules we can run our option attack. This counting system can be applied to both balanced and unbalanced formations to allow us to gain a numbers advantage. When installing the counting system, we preach the philosophy of numbers, grass, angles.

We want our players to think based on our perimeter rules; it is not a defense, it is a perimeter, apply the count and attack. We also want to stress the importance of being decisive, make a decision and go! In all aspects of our offense, whether it is counting the perimeter or the QB reading, we must be decisive. Good things happen when our players communicate the perimeter, are decisive and attack the alley.

Installing the Count:
We start by drawing an imaginary line from the outside hip of each offensive guard vertically through the end zone. Everything between the two lines (the crease) will be taken care of by the offensive line, while everything outside the line is included in the count. When first installing the count, we teach based off a 50 defense because the majority of counting scenarios can be applied. When first teaching, we also speak in terms of a triple option attack because it is the basis of our offense (Diagram #1). 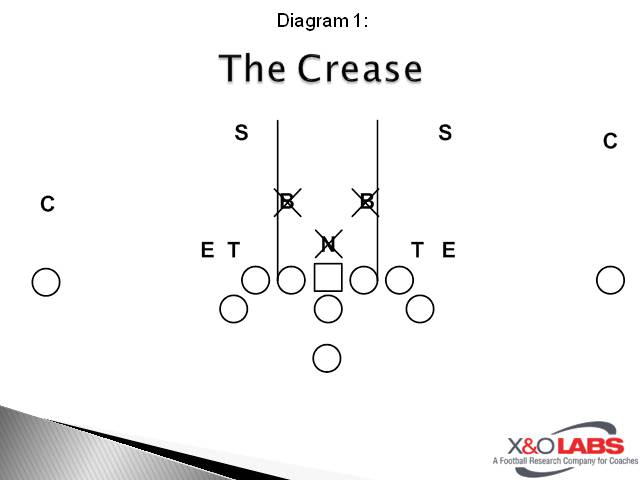 Our perimeter count communication will begin from the outside in, so it will start with our WR. The WR is responsible to identify and block non-run support (NRS). Every play the defense will have at least one player who will be in a NRS role (halfback pass player). The WR determines NRS by asking himself “if I run vertical who will cover me?” If he believes the corner will cover him then the corner is NRS. If he believes the safety will cover him, the safety is non-run support. We will now exclude the NRS defender from the perimeter count as he is accounted for by the WR.

When teaching the WR our counting system we stress the importance of creating angles on the perimeter to give us blocking advantages. They also must align to execute; if the WR is going to push crack the safety he may have to cut down his split depending on how hard the safety is filling the alley. This also helps to set up the post seam off of play- action pass.

We can now count the remaining defenders on the perimeter. In most scenarios, there should be two to three defenders left. Moving from the outside hip of the guard to the sideline (inside-out), and from the line of scrimmage towards the safeties (low to high), we count each defender. 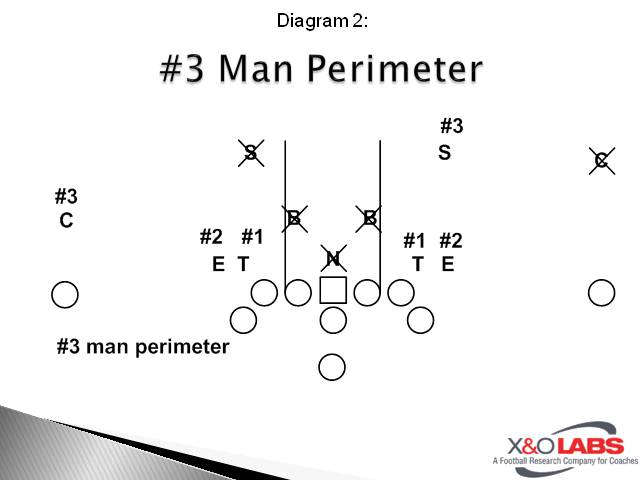 The QB cannot start the cadence until all perimeter communication is completed. The perimeter communication, along with the offensive lines calls, will happen simultaneously as the QB approaches the line of scrimmage. The QB will lighthouse (scan left and right) as he approaches the line of scrimmage, listening to calls, watching hand signals and counting both perimeters to see if there is a numbers advantage to one side or the other. Once the QB places his hands under the center, all communication must be completed and all players are silent, listening to the QB. The QB will signify in his cadence the perimeter count to the side we are running the play. In diagram #2, the QB would identify the perimeter as a three count. When coaching the QB we always talk to him about numbers advantages; we always want to run to where we have more men (this comes into play more when we are in our unbalanced formations). That is why it is crucial that as he approaches the line of scrimmages he counts both perimeters. In a perfect world, the QB has the ability to audible any play to either side based off a numbers advantage. However, like anything in football, this depends on how much the QB can handle both mentally and physically. We will give the QB as much freedom as he can handle to put us in the best play possible.