At Springfield College, we utilize an under-center triple option offense. The foundation of our offense is the inside veer. To effectively run the inside veer, we must drill individual and team techniques numerous times. Through hundreds of repetitions, we look to build confidence in the execution of the offense so that when the play is called in a game, the players react rather than think. In order to build this confidence, we incorporate a drill progression that focuses on each individual aspect of the offense, with one drill building on the previous, working towards full team execution. The progression is as follows: quarterback footwork, mesh, ride/decide, pitches, and perimeter. 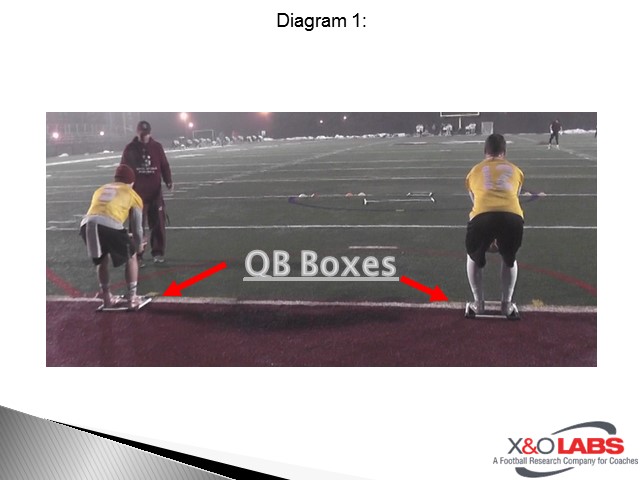 The purpose of this drill is to work the quarterbacks’ footwork, hand placement, eye progression as well as cadence. Equipment needed for the drill: PVC pipe box and footballs (can also incorporate medicine balls as well as weighted footballs). Utilizing a two-foot-by-two-foot PVC pipe box we will have the quarterbacks start with their feet inside the box with the football in hand as if they are under center. One quarterback will start the cadence, with the rest following his lead, similar to a choir, in order to practice having each quarterback’s cadence sound identical. This is essential because all motions are predicated off the quarterback’s cadence. Once the quarterbacks simulate the snap they will execute a toe replace heel step so that the heel of their left foot (if running the play to the right) is in-line with the back-right corner of the PVC pipe box. The quarterbacks will freeze after their first two steps to ensure proper footwork, body position and eye placement. After the first two steps have been executed, the coach can add the entire phase of the mesh, so that it simulates the QB replacing the dive key’s heels and attacking the alley. Also, a visual key can be added to train the QB’s eyes by having a coach or player stand in the place of the dive key. On the snap, the coach or player will hold up a number with their fingers which will have to be read aloud by the QB. This helps to train the QBs eyes to be on the dive key every time. Important coaching points; pigeon toe the feet, mental weight on drive foot, hands beat the feet, pin the chin, eyes to the dive key, Z’s in the hips, knees and ankles.

To study drill film of this technique, click on the video below: