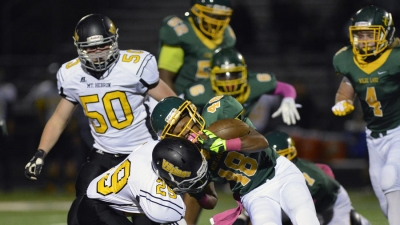 For nearly twenty years, Wilde Lake had run a Bone offense with the Power as the base play. During the 2006 season our coaching staff felt like we had hit a crossroads and made a switch to the Double Wing offense again with the Power as the base play. Since changing to the Double Wing Wilde Lake has averaged 3,000 rushing yards and 31 rushing touchdowns per season.

For teams looking for a physical style offense, the Double Wing has its advantages. In the base formation, double tight end double wing, a defense must account for 10 gaps on the line of scrimmage creating stress on a defense’s run fits. Smaller, quicker lineman can excel in the offense due to the high use of pulls, double team and down blocks. The Double Wing combines both power and deception in its play series. Where a Spread style offense gets the ball to multiple athletes by throwing the ball; the Double Wing allows multiple athletes to run the ball. Perhaps most important, the Double Wing is not a quarterback dependent offense. The Double Wing thrives with physical quarterbacks, great passers, or great runners. The offense has its critics, but when executed properly it can be very difficult to stop.

There are several core plays in the Double Wing offense, but the Power is always our first install on day one. The play combines a single blocking rule that accounts for multiple defensive fronts and stunts, with a double team block at the point of attack, and mass at the point of attack through the use of several lead blockers. The ability to run Power to every back out of multiple formations has made the Power play the foundation of our Double Wing offense. Our goal is to be able to run Power against any defense at anytime – when in doubt run Power. In fact over the past seven years we have called Power over 40% of the time and have had games where the play was as high as 60% of our plays called.

Our linemen are split six inches across the front and have their helmets on the hip of the center. We emphasize with our linemen that we want to tighten up our splits and never crowd the ball. The desire is to have more room to adjust and pull at the line of scrimmage. Our experience is that many teams will crawl, dirt dive, or attempt to hold our linemen after the snap; so being backed off of the ball eliminates a lot of the advantage a team gains using those tactics. We do not switch sides with our linemen, so they must all learn the play side and back side blocking assignments and techniques. Early in the season we drill the blocking scheme by presenting different defensive looks to our players. We call this period “Power Hour.” We start in a front and run the Power play to perfection. When the blocking scheme is mastered a coach will add a 12th defender to the defense without informing the offense. When we are successful another defender is added. We have mastered the Power while blocking 14 defenders at a time. Most of the time our players do not notice the extra defenders until there is an unblocked safety on the third level of the defense. This is a great way to prepare athletes for success. Imagine the confidence that your offense will have after successfully executing a play versus 14 defenders. Our Power blocking scheme is essentially a Gap blocking scheme as shown in the table below.