The Read Based Route Running System

Before I came to Quitman, I was the OC at a school that arguably year in and year out had the best athletes in the state. In my 4 years as OC, we had 24 kids sign to play college ball, 8 of them FBS and 5 went to Power 5 schools. So, the question of "How do we get kids open" was not an issue. We played fast and kept it simple. However, when I took the HC job at Quitman, we did not have fast kids or a lot of athletes in the school. It was a new program and we needed numbers, so the Dead T or Wing T wasn't the answer, we had to be flashy, but how do we get these slower, less athletic receivers open? Solving this problem is how the concept was born. Our passing game is built on our WR's being responsible for beating a defender, even against a zone, they are responsible for a defender and they have a read just like a QB does to get "open".  Every route we run has a variety of options that they are to use to beat that defender based on how the receiver reads the defender. We do not use typical progressions or rely on timing at all for our QB’s so if you are a traditionalist with your quarterback play, this might not be for you. This article is about the WR position so I will be glad to visit or give any insight on QB Play if you reach out to me.

My favorite part of this method is that it also gives us an easy answer to "What is Open?". Our WR's and QB's can all answer this question and use the same answers when watching film. We name our routes using traditional names (i.e. stop, post, wheel, snag) but our kids know that the route isn't a couple of straight lines with perfect angles and arrows, but instead its a "Cluster" of routes that they will run to "run where the defense isn’t”.  We do not use steps, or yards, or destinations when teaching, we simply teach releases and how to read a defender.  The rest of the adjustments they will make on the fly during the game.  It involves a lot of teaching on the front end, however once they are comfortable with their options, they get a better "feel" for where they should go and it makes us tough to scout because it appears that we have a ton of concepts, but that is not the case at all. We use the same concepts versus man and zone because we are working away from defenders and treating the zone as a man-to-man type coverage, forcing defenses to cover every area of their zone and with the QB Read, we have all defenders accounted for. 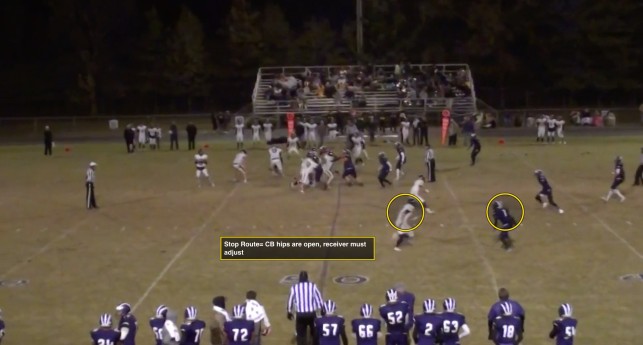 The first thing we teach is releases.  We start with man releases because that is the best way to understand LEVERAGE, which is huge for understanding what we are trying to do.  We use a 3-move release and a Diamond release vs press coverage.  After that, we then work route stems and continue to teach leverage and stacking defenders. Where what we do gets a little different is in the next step.  We then teach them to read defenders on the move, and change their route based on that read to be open. Regardless of speed, if they make the right read and get into the route based off that, they are “Open with leverage”. We see a lot of bracketed and read-type coverages.  Sometimes that can be hard on QB’s to recognize and see while moving in the pocket and trying to maintain timing.  So, we let the WR's take care of that, because they are not having to worry about getting sacked.  We teach them to read a zone defender we use the 3 H's.

THE ROUTES AND COACHING CUES

The first route we usually start with is the Stop.  It is not a 5-yard or 7-step stop, It is just a “Stop”.  If you ask one of our outside WRs what a stop is, they will tell you “inside release, and I push vertical until he flips his hips, once that happens, I drive, drop, and snap around. If he never flips his hips, I continue and push vertical and look over the top.”

It is a lot more than “go five and turn around”, but it allows our players to understand HOW to get open and what it takes.  Regardless of the coverage, their whole focus is on the corner and how to beat him to get open. We give them the tools; they get a blank canvas and work their defender according to their skill set.