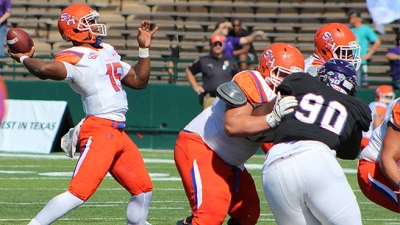 In this case, we delve into the specifics of the pass game at Sam Houston State University. The pass game is centered on quick game concepts with even quicker release points by the quarterback. All of the fundamentals and techniques emphasized in case one and two are tied into each of the pass concepts described in this section. Coach Longo and his offensive staff break their pass game down into the following components:

Editor’s note: Before detailing these pass concepts, it’s important to note that the concept side of the route is always tagged to the formation strength. If it is a balanced formation such as 2x2, the call side is predicated based on the formation call. River would mean the right side is the play side and left side is the backside.

These quick game tags are the crux of the Sam Houston State’s quick passing game and according to Coach Longo the main reason why the Bearkats rushed for nearly 4,000 yards in 2015. In fact, wide receivers coach Terence Archer told us that “it’s so ingrained in our system, it would be weird for our players if we weren’t using them.” There are 18 tags (including pass tags) in the Bearkats system, but they will use a steady diet of eight during most game. According to Coach Longo, the reasoning is simple, some slots are better runners than backs and why have them block if they don’t have to. “We don't’ have to beat our slots by telling them they have to block a 235-pound outside linebacker,” he told us.

According to Coach Longo every year it gets harder and harder to throw RPOs, particularly third level reads, because the emphasis is now on linemen down the field. “Defenses are taking those concepts away by playing man free coverage,” said Coach Longo. “RPOs are being relegated to the shorter throws because the longer throws are being affected by linemen downfield. We answer with our quick game tags. It may seem like we’re running RPOs, but they are just tags. The bottom line is you’re either playing corners off or corners hard, and as long as that is the case, I’m going to use tags. Most people will say that offensive coordinators are not patient enough to throw 30 hitches down the field. That’s when defenses will play the deep ball and allow us to take things underneath. I don’t care how boring it is. If that’s what you are going to give us than that’s what I’m going to take. We’ve done all this with lesser talent in years and we’ve been successful.”

In Coach Longo’s system the quarterback is expected to make a decision pre-snap based off leveraged defenders. He will always instruct them to take the numbers advantage and when all the numbers are equal, go with the lesser number. Two-on-two is better than three-on-three and one-on-one is better than two-on-two. He’ll often prefer a hitch between a quarterback and wide out before running the football. “We will break the defense down into thirds,” he said. “We will see if we have numbers to either side of the formation. If we have numbers to either side, we throw the corresponding route. If all numbers are even, we know we have six in the box and we can run the ball in the read game. We like running the ball against a six-box. The quarterback makes the decision based off advantage.”

These tags are built off every run concept in the Bearkats offensive system, but there is a protocol for mixing and matching them. Perimeter concepts. If an outside scheme is called like speed option or outside zone, the receivers to the side of the play concept are expected to block on the perimeter. But if an inside run is called like inside zone, dart or power, the tag talks to whole receiver picture. It usually becomes a mirrored route to both sides of the formation depending on what looks good that week against the defensive structure. “We run slant, hitch, out, pivot, etc.,” he told us. “We will tag all our run schemes with whatever I think looks good that week. We just focus on how to beat Nickel, Dime and cover zero.”

The quarterback simply looks to the perimeter to see if he has numbers. “Whatever we do, our quarterback will ghost throw everything,” said Coach Longo. “If he hands off the zone, he fakes the fade route. We try to hold somebody’s eyes. Our running backs will carry out fakes for 10 yards. If you watch those safeties you will see them hanging their eyes on the back that doesn't have the ball rather than tracking the bubble screen. You’re creating more space when you hold their eyes. He might be the touchdown saver, but if hold him for a minute it affects the play. Sometimes the back could actually spring loose and block a homerun corner down the field.”