At Emmett High School we are a base Spread Offense with Air Raid inspirations that features a large number of RPOs.  We run these plays from a fast tempo and feature, on average, about 10-15 formational adjustments per game.  The heavy reliance on RPOs has caused us to make the decision to re-implement more of our Air Raid roots into our passing offense this next season.  At the time of this writing, we are currently the #1 ranked passing offense in the state of Idaho by attempts, completions, yards passing per game, and overall passing yardage in a season.  These calls have and will allow us to create a false narrative for the defense by which they are not sure whether the play will be an RPO or a more down the field passing concept.  The name of our consulting group is the Surface To Air System but when we refer to our Air Raid twists in the drop back game we call it the S.T.A.R. Package (Surface To Air Raid).  There are four major Air Raid concepts that we have diversified and synthesized with our own unique twists and incorporated into our S2A System.  These concepts have been altered but still, contain heavy doses of Air Raid DNA.  The four major drop back concepts that we brought over are the 4 Verticals, Y-Cross, Shallow Cross, and the Mesh.

The 4 Verticals or 4 Verts play has long been a staple of our system.  We feel that this play is the ultimate constraint play in order to keep defenses honest.  Most defenses are able to rotate coverages and bring exotic blitzes only to the extent that they are able to defend the back half of their coverage.  In short, they will do exotic things if they don’t get beat deep.  Therefore, the 4 verts play is pivotal in keeping defenses honest.  The play can be featured from a 2x2 or a 3x1 structure.  If 4 verticals are executed from a 2x2 set the outside receivers will execute Fade or Takeoff Routes, the slot receivers will execute Bender Routes, and the running back will execute a Shoot Route. 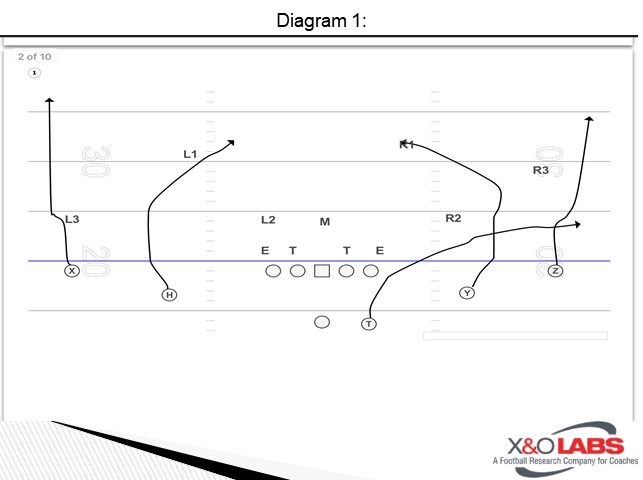 The Fade Routes must turn the corner’s hips and prevent him from playing any sort of Read 2 type of coverage family.  The slot receivers will outside release off the ball and execute a 5 or 7 step release based upon the OLB’s alignment and defense.  If the coverage remains MOF closed, then the slots will both work vertically. If, however, the coverage is a MOF open family they will defeat the OLB and then bend to grass under the safety into what we call the Bermuda Triangle.

The Bermuda Triangle is the area between the MLB, OLB, and safety.  We feel this is a dead zone where we can work and get ourselves open pass completions.  The running back will execute his Shoot Route to the flat or can be incorporated into the protection scheme.  Our read progression is quite simple as we read Deep to Shallow to Mid.  This translates as the Fade Route, to the Shoot Route, to the Bender Route.  We read it this way so that any trap coverage corner is beaten by the Fade Route and we hole shot behind him to prevent that coverage answer.  We check the short route next to prevent any sort of blitz charge by the second level defenders.  The Bender Route is read last as it takes the most time to work to grass.

This route is essentially unaltered when we execute it from 3x1. 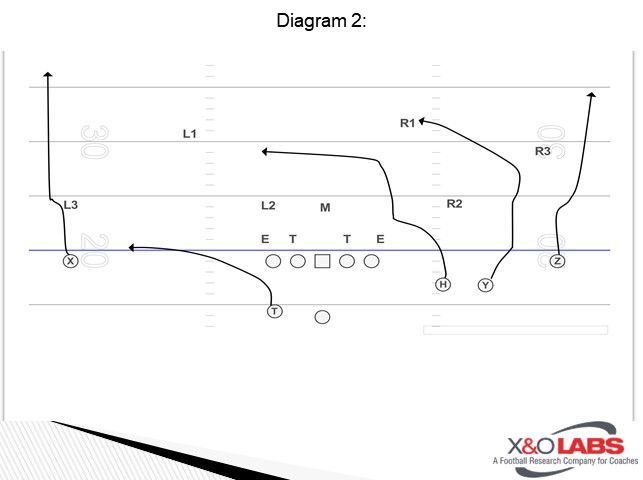 In 3x1 the #3 receiver simply bends and attacks the hash he would have run up in 2x2 and applies all the same rules.  If the MOF is open he would bend under the safety but if the MOF is closed, he would work up the hash.  The read progression would remain unchanged and the play caller is free to flip the running back Shoot Route to the weak or strong side based upon his protection preferences.

The 4 Verts play has long been a staple of our offense and is a great Air Raid play that defeats multiple coverage families.  This play is easily tagged and can and is altered in the S2A System to attack a variety of defensive presentations.