Varying Concepts to Get Playmakers the Ball

Editor’s Note:  Jay Wilkinson is currently the Head Football Coach at Coweta High School.  He took over the Coweta Football Program in February. He operates a no huddle wide open attack.  Prior to his arrival at Coweta, Wilkinson served as offensive coordinator at Broken Arrow High School. During his three years as offensive coordinator, his offenses broke ten Individual/Team School Records and had one of the most successful three year runs in school history.  In 2011 the offense set a school record for points in a season with 586 in fourteen games. Prior to arriving at Broken Arrow, Wilkinson was the offensive coordinator/quarterback coach at the University of Central Oklahoma. While at UCO, the offense set 18 Individual / Team school records from 2008-2010. Wilkinson was the head coach at Metro Christian Academy for the 2006 and 2007 seasons.  His record was 16-6 during that time. Jay started his coaching at Shawnee, following by stops at Jenks and Union. 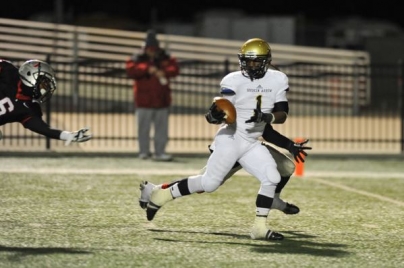 This past season our offensive staff faced a difficult challenge.  We had a young man that played wide receiver that was our best playmaker on offense.  Growing up he had played running back, but as a sophomore we moved him to WR because we had a group of talented running backs.  So we were faced with the challenge each week of finding multiple ways to get him the football, knowing that defenses would look to take him away by different tactics each week.  In 13 games he had 71 receptions for 1155 yards and 14 touchdowns as well as 3 carries for 19 yards and 1 touchdown.

Potential Problems and Solutions each week

Problem: Did our QB’s arm strength eliminate ways to get him the ball?

Solution: Luckily our QB had a strong arm and could make the verticals throws that we need him to make.  However, if your QB doesn’t have a strong arm you will have to take that into consideration when game planning ways to get your WR the ball.  If we were playing a QB with a weaker arm, we would eliminate most vertical throws and concentrate on finding ways to get our WR the ball with quick game concepts, screens and reverses.

Problem:  The defense chooses to double cover him.

Solution: This was probably the toughest challenge each week.  When using this strategy, most defenses would play an underneath defender in a press technique with safety help over the top.  The obvious thing to do is to use your other receivers and your running game to take advantage of this strategy.  For example, if the defense chose to double cover him, then they either had to leave one of our other receivers uncovered, single cover them, or play five guys in the box.  We carried answers to each one of these situations on a weekly basis.  If they were leaving someone uncovered, then we attacked with bubbles or fast screens.  If they single covered them with no safety help, then we attacked them with quick game (All Slants), or some form of rub routes.  If they covered the other receivers and played safety help over the top, then we had equal numbers in the box and ran any run in the game plan that week.   However, we didn’t want the defense to completely take him out of the game, so we devised ways to move him around within the formation (even in the backfield at times) so that the defense wouldn’t be able to double cover him 100 percent of the time.  When aligning our playmaker in the backfield, we tried to focus on wide runs like outside zone and pin and pull so he could use his athletic ability to get outside.  Also concepts in the throwing game that allowed him to free release into the pattern were utilized.

Solution: Most weeks, our guy was going to be better than the player that lined up across from him.  They were a couple of games that the matchup was about even.  Even though we felt like our guy could win most of these matchups, there were times that we designed schemes to get him lined up against one of the defense’s lesser players.  One of the ways that we accomplished this was by the use of shifts and motions.  Also, during the course of game planning, we always tried to determine if the defense aligned players based on the hash, formation, or just played them on a side.  Once we figured out where defenders were going to align, it made it easy to position our guy versus the defender we wanted him against.

Solution: Any time you are a passing team, you have to be conscious of the weather.  Just like we didn’t want to let the defense take our WR away, we didn’t want weather to either.  We always carry ways to get him the ball when the conditions are bad.  This includes situations where having the ability for him to align up in the backfield is important.  On a rainy night, you don’t want him lined up outside with no ability to get him the ball.

Ways to Get Him the Ball