Using Trips to the Field Exclusively 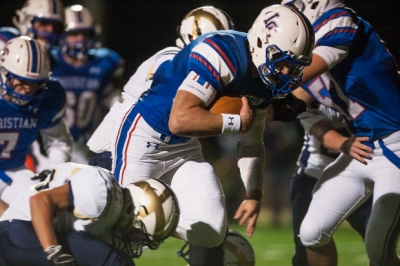 Several years ago as we transitioned into a 100% no huddle offense, we realized we weren’t operating at a pace that was actually giving us a competitive advantage. As we began searching for ways to shave off extra seconds in between plays, we soon realized one of the things that was slowing us down the most was changing formations nearly every play. Changing formations took up time while signaling the play in and while players moved into the formations. Thus, we began to tinker with the idea of running one formation exclusively throughout a game.

Over the past five seasons, we have used one formation almost exclusively on offense. While we have used other formations at times we have never entered a game with more than three formations in the game plan. There are three important factors that you have to understand if you are going to run 95% of your offense from one formation. First, you have a to pick a formation for your offense and your understanding of how to attack a defense. Second, you have to embrace a “take what they give us” mentality and drop a “this is our bread and butter” mentality. Finally, you have to have answers to the defense’s potential adjustments to your play-calling.

Why Trips to the Field

Over the years, I have evolved into a true spread option, RPO, zone-based blocking scheme coordinator. When I see a defense line up against 10 personnel I immediately start to see zone reads tagged with bubble screens, inverted veer, four verticals off of play-action, etc. Therefore, as we've traveled this journey towards becoming a one formation offense I’ve settled on a formation that fits my thinking as a play-caller.

If you don’t think about offense the way I do, it would be a mistake for you to copy what you see me doing in this article. If you’ve been a Wing-T guy for years than you need to pick a Wing-T friendly formation. If you’ve traditionally used more of a pro style approach than pick a formation that is conducive to calling pro style types of plays.

The point I am making here is that we settled into what we call an Open formation because it fit the way I have learned to attack a defense. Our open formation is a 3x1 formation, with the trips to the field, using 10 personnel. From that formation, I have all of my favorite options available to me. I can run my base RPO, speed option, inverted veer, etc. I can isolate my best receiver on the boundary side and attack with verticals or spacing concepts on the field side. The point is, I suggest that you take what I share here and find ways to apply the principles and ideas to your way of thinking about offense.

“Take What They Give Us” Mentality

You don’t have to be a football genius to know that there are too many defenders in both of the diagrams below. The point I am making with those diagrams is that most defenses line up in either a 4-2 or 3-3 front and the only real difference between defenses is the location of the 11th man. Yes, there are dozens of possible variations to the defenses in the diagrams, but you can begin to anticipate most of those as you study film. Each DC only has a handful (or fewer) variations he's comfortable running against our tempo and the diversity of concepts we bring from our one formation. 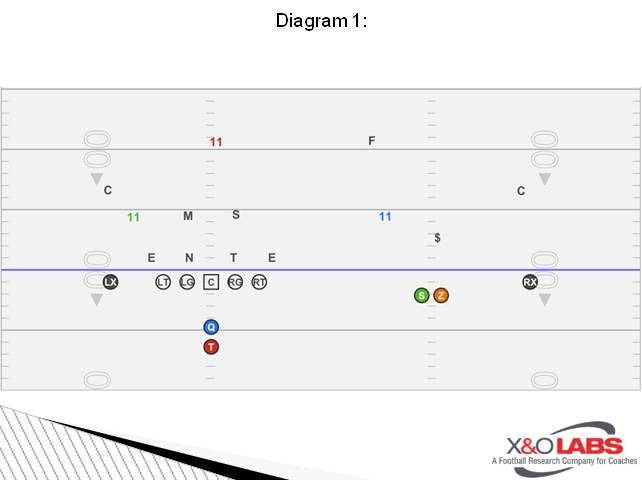