Every coach has a trick play or gadget, many are known for that special play that they like to run in that key or crucial game. What I find interesting is most teams don’t run them till they need them.  If these plays are so good why do we put them in our hip pocket, why do we just break them out 2-3 times a year? The fear is that we don’t want to use them up, we want to save them till a crucial juncture in a special game where we must have them to win.

My philosophy is the opposite. I want to use at least 3 new specials a week and by the time we get to the playoffs we have tons of special plays. We don’t run them all in a week just the 3 or so we plan on actually using. This approach forces our opponents to work on a concept that may take us 5 min to install but over the course of a season adds up to overwhelming numbers of plays that they must prepare to defend.

We coach our players to trust these plays while understanding that we don’t live and die by them.  We use them so often that if they don’t net a touchdown it is not a big deal. Instead, it is just part of our overall philosophy. Often these plays are designed to generate small gains.  In general, they are low risk high reward and the kids love them and they want to be part of it either by naming them or searching the internet to give me ideas. It creates a real degree of team ownership.

We don’t call our special plays gadgets or tricks instead we just refer to them as special, so they are thought of more as just a common part of our offense not a prayer play. We will introduce these plays at the beginning, on 2 point plays, after halftime or certain down and distances situations during the game. Below are examples of some of the concepts that we have used over time, but we have others that we are rotating into the game plan as well from week to week.

The first play we will look at is called the lonesome pole cat (Diagram #1). I was introduced to it as a defensive coordinator many years ago, and as a coach the things that we find the hardest to defend should be things we research and possibly incorporate. If you adhere to the philosophy motion creates emotion then this may have you seeking psychiatric help.  The concept is simple unbalanced set that can attack any defensive approach. We package it as a two play check. While we like to use this at any point in the game, for this report we are looking at ugly downs and distances like 3rd and long or even on 4th and long. 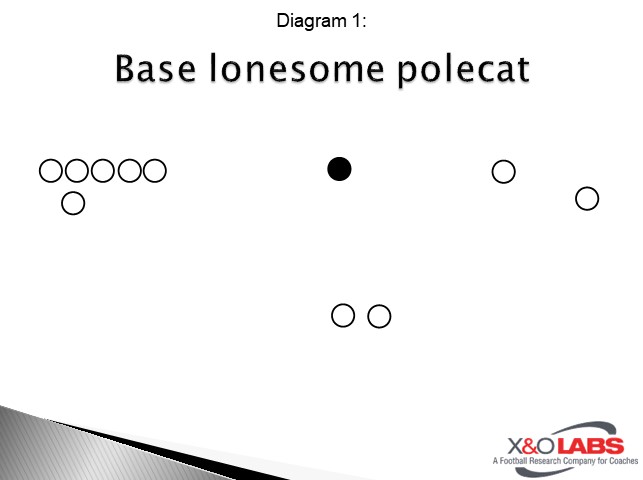