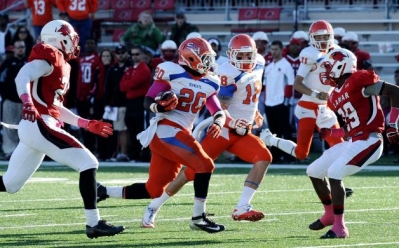 In this case, we focused our research on how coaches were grouping formations and personnel to make them more relatable to players. We’ve found coaches can have upwards of 8 personnel groupings and over two dozen formations. We wanted to find ways in which coaches are simplifying their offensive packages to utilize as many groupings/formations as possible without jeopardizing the learning curve of their athletes.

We surveyed coaches and asked the following question:

Q: What has been the most efficient way to group or relate the names you use in your personnel groupings to make it more understandable for your players?

The responses are below. We kept them anonymous in order to protect identity.

“We use colors, with the darker the color the more run-focused the grouping can be. For example, Black is our Maryland-I formation, which almost 90% run. White and Grey colors are two back pistol formations, which are closer to 50/50 run/pass.”

“All our formation calls come off our base formation, which is double twins. The X and H are on left side and Y and Z are on right. We use one word for the formation such as ‘Ace.’ Then we have specific words that tell our wide receivers and tight ends where to be. Such as ‘Ace Hit,’ this tells the H to come across formation. This has worked better for us than when we just said ‘Pro Right or Left’ because it tells each kid where to be. Bronco and Buffalo tells our B back (H back) where to align. An example would be Bronco ‘Yo.’ B would be to right and Y would go over to left to create a Pro twins look.”

“We simply yell out ‘two-back’ if we want the H-back into the game and we'll call out a receiver (usually a slot) for him to replace.”

“We use boards with pictures to move players from the same personnel groupings and formations to different places within the called formation.”

Word Associations Based on Positions