Our philosophy is to use our team speed coupled with the sugar huddle to try and outflank the defense and hit them before they are ready. We like to be able to attack both vertically and horizontally. We try to have a concept to attack all gaps and areas of the field to and away from jet motion or the featured play of our series. In doing this we have "if-then" built into our 3-prong attack. "If-then" is our answer to how the defense plays us. A 3-prong attack is being able to hit the defense with an inside run, outside threat, and deep threat vertically down the field. Essentially making defense cover the entire field. The Sugar Huddle or quick huddle is breaking the huddle and sprinting to the LOS. There are a few different ways you can do this.

We will start with the jet that we like to run out of multiple formations with a few misdirections off the jet. One of the reasons we went to the jet is the same reason we went to the Wing-T 7 years ago our;  undersized line. The Jet requires minimal blocking at the point of attack and our best players are usually making the key blocks.  Like any series-based offense, the counters and PAP are only as good as the featured play, so we spend a great deal of time on the little things that make the Jet work for us.

The sugar huddle has been a key part of our offensive identity and success over the past 3 seasons. We have used it in a few different ways. We started out by just simply using a tag when we wanted to break the huddle at a super-fast pace and almost exclusively used it for sweep plays. We then used it for entire series or drives and eventually implemented it almost full-time. Auburn University has used it in a variety of ways leaking out the C and a few WR's and then having the rest of the offense break to the LOS and run the play. We simply leak WR's and then break to LOS. The main idea behind the sugar is to catch the defense misaligned. Often when we snap the ball the defensive line is still not set and allows our OL to get a great push off the LOS. One of the biggest obstacles for Wing-T teams using sugar huddle is deciding if you do or do not flip your OL.  There are trade-offs for both, and we have done both over the years. Not switching allows you to break faster. Our goal is to run the play from break to snap within 4 seconds. We have a few tempos that we use within our system also. These include quick, turbo, and milk. When we call milk, we stay in the huddle until the 10-second mark then breaks as fast as possible for LOS. This allows for our players to catch their breath and run time off the clock. Using different cadences when in sugar also help to keep the defense off-balance. We use a first sound cadence often and then switch it up while using sugar huddle. We feel like the combination of the two often causes the defense to jump offside. 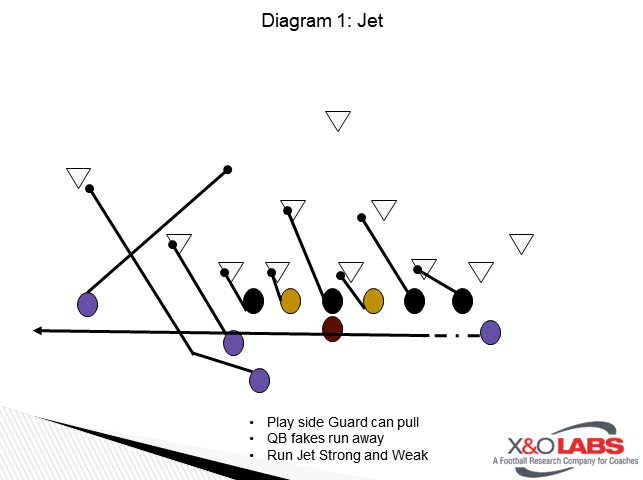