Everything we do in our offense is about operating with great tempo.  In order to play with tempo, you must practice with tempo.  This is especially true for the offensive line.  We want our individual period to move quickly by eliminating lines and wait times.  Our reps are maximized by having as many players as possible work at the same time.

At Rose-Hulman, our practice field is separated form our campus by a bridge.  This is a great device to let our players know that as soon as they cross the bridge they are locked in and ready to go to work.  Each position group has a certain set of drills they do as soon as they cross the bridge.  This puts them in a working mindset even if they are out to practice early.

The offensive line will work a circuit of drills that highlights almost all of the skills they require to be successful during a game.  One of the reasons we choose to run an up-tempo offense is because of the limited practice time we have.  We believe it is critical that the offensive line is working the entire time they are on the practice field.  Our pre-practice circuit is one of the methods we developed to have our offensive line constantly working.  This helps both improve their conditioning and gets them used to the constant activity of an up-tempo offense. 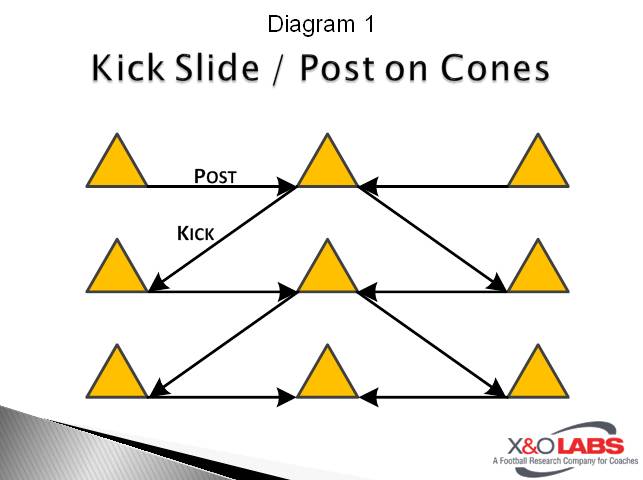 In the first portion of the drill circuit, the OL will perform the Kick-Slide/Post on Cones Drill.  Three lines of cones are set up with each cone about 3 yards from each other.  The lineman will start on the top left cone and assume a great pass pro demeanor for an offensive lineman on the left side of the line of scrimmage.  He will post to the center cone, then kick to the next cone on the left.  Once he gets to the third center cone, he will hustle to the top right cone and repeat the drill as an offensive lineman on the right side of the LOS.

In this drill, we want to ensure that the offensive lineman is using a proper tilt to keep the weight down the center of his body.  The shoulder in the direction that the lineman is moving should be slightly raised.  This will prevent too much weight being placed on the outside foot on the kick-slide, and the opposite on the post.  Keeping weight down the center of the body is critical to staying balanced throughout the entire rep of pass protection.

To see video of Coach White’s Kick Slide/Post Drill, click on the link below: