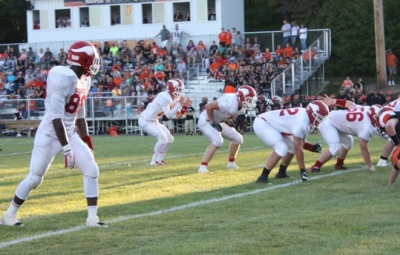 The no huddle can be run many different ways, but we have found great success using the wrist card method. Getting to that point was a process, but I think the process validated the results. So for that reason, it is important to start by looking at how we got to where we are with our wrist card no huddle system.

I have always run multiple sets and styles of offense, whether it was single wing based, triple option style or variations of the wing-T. When I returned to Plymouth as the offensive coordinator, I began to blend my newer offenses with series that were already in place. This created many word and number combinations. To call a play, I would often need to use five or six words to get the formation, motion, action, and blocking scheme. My first attempt to simplify this vast offense was to create a series using a three digit number system. The first number would indicate the series; the second number the ball carrier and the third the opening or hole.

Although this system did cut down the amount of information the players needed to process, it did not solve the whole problem. We quickly found that there were wrinkles and variances of certain plays that we wanted to run. To solve this issue, we added a key word or series of words to the numbers system. This defeated the purpose and caused a lot of confusion especially for our linemen.

From there we still felt we needed to take advantage of our athletes in space. Running a spread offense was the obvious choice. We also wanted to control the flow of the game by using tempo, so we developed a no huddle offense using three panel wrist coaches that every player wore. While this is not exactly unique, it was what we eventually did with the insert cards that made all the difference.

The Rational for the Multiple Wrist Coach System

Our first adjustment was to simplify the massive amount of offense knowledge on the wrist coaches was to create a separate set of cards for the line. The linemen traditionally had to learn what to do on every play or listen to a string of words and/or numbers trying to pick out the one piece of information that applied to them. The solution was to eliminate all the non-essential information on their cards.

We block our Outside Veer (reading the end man on the line) exactly like we block our Blast play (kick out the end man on the line with the running back). So on the wrist coach for the line, it simply says “Base” which is our name for the scheme. This base scheme has the play side block down and the backside guard pulls and funnels to the inside of the hole. We use that same scheme for the inverted veer, QB power sweep, and jet blast play. The end result was the line has the same assignment on their wrist coach for all the plays and nothing else. The backs’ cards have the series and play direction, but no scheme.

In our first attempt at using wrist coaches, I simply numbered the boxes and signaled the number. We found that players found the box, but often struggled with the signal. We used a body clock like many coaches, but found that some players got confused by the number of the box and the play number. I would signal a 3 and a 4 which was a toss sweep and some players would try to run 34 which was an ISO play at the time. It never occurred to me that this would be a problem, but apparently some players see 34 and would think 34 instead of finding the box 34 on the card.

A second problem was fitting the box number and the plays on the cards so they could be read easily. The solution was to create a three column by ten row card that was color coded. This eliminated the need to search for the number all over the card, but only in the column of the signaled color. (Diagram 1) 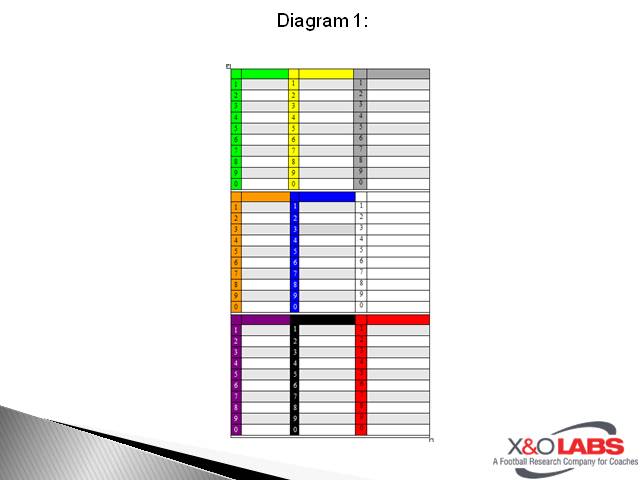 We developed a hand signaling system for the colors and a type of body clock for the number to get the information in. The color narrowed the card into a third and the number dictated the row number. We signal in color number plays in all group and team practices. Coaches will walk and talk the actual series names, descriptions and play technique during individual coaching periods, but never during team.