At its core, the no huddle is about streamlining communication. Each of the coaches that responded to our survey has their own twist on what works best to communicate with their entire team from the sideline. Sure there are some who are part of no huddle systems, but even within those teams you will find slight variations. Each was created as simply and effectively as possible to communicate the next play's formation, direction, type, motion, and responsibilities to the players on the field.

From the outside these communication systems appear to be quite complicated and even random, but our research has shown the truth to be quite the contrary. The research shows that teams’ communication methods are often directly linked to the goals they have for their offense. For example, if a team is looking to maximize the impact of increasing tempo it would be focused on using the fastest method of communication. These teams are willing to give up complexity for speed. Another team might focus on communication methods that are more flexible so that they can attack the defense by checking the play at the line of scrimmage. Either way, they have made their system fit their needs.

As part of our survey, coaches were asked to categorize their communication system as one of four distinct types; hand signals, verbal relay, written, and visual.

Here are the raw results: 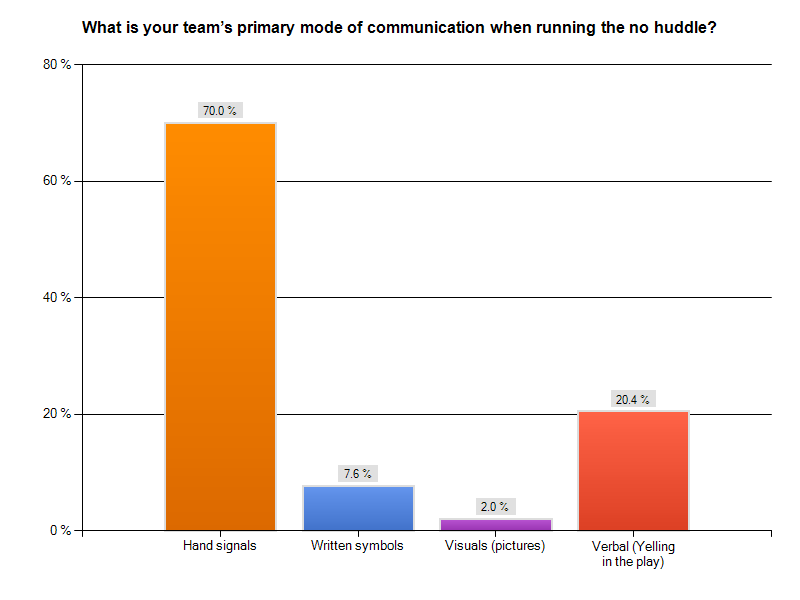 The results show that the overwhelming majority of coaches are using hand signals are their primary method communication. While these systems vary greatly, they have many concepts in common. These systems are discussed in much more detail in the following sections.

As you can see from the above data, hand signals are the preferred choice by the vast majority of those surveyed. Further analysis shows that within this broad category, there are two distinct camps. One group of coaches uses hand or body signals for the players that tell them all of the information that they need for that play. The second group uses similar signals to point the players to information that they have on their wrist cards.

Before we get into the differences and advantages of these two approaches, it should be noted that both coaches on both sides of this argument provided strong and justifiable responses. On one side, countless comments stated how helpful the wrist cards are in making their team function and win. Still others argued that the cards slowed them down and caused more problems than they are worth. These differing opinions show just how important the individual team circumstances in determining the best communication approach. For that reason, we have set up the reviews of the individual signal systems to clearly lay out the pros and cons that coaches shared with us.

In contrast to the wrist card hand signal, the symbol system can be as complex as you want. Coaches are not restrained by a limited number of digits or colors in the spectrum, but only by his imagination in developing new signals. The signals that the team uses are unique to their team and, in most cases, have developed over time to fit the needs of the team. This approach is used by roughly 30% of teams including most collegiate programs we surveyed.

Since this system often carries many more signals than wrist card systems, coaches take great care to ensure that all of the players know the entire signal catalog.
Here are a few of the tactics that coaches suggested:

The detail associated with these signal systems makes them much more difficult to share in their entirety. With that said, a few coaches were willing share some of their rationale for their individual systems.