When we released our no huddle survey, it quickly became one of the most extensive to date. We surveyed over 1,000 coaches nationwide, from all levels of football, and found some incredible results that shed light on what works in no huddle systems and, more importantly, why it works. This special report will provide insight to even the most veteran of no huddle coaches while helping rookies as they look to get their own no huddle system off the ground.

In some ways, a report on the no huddle can be extremely broad. There are a myriad of angles from which we could research. In the end, we decided to follow our instincts and start where the research led us. That is to a very simple, yet layered question... Why run the no huddle?

We start here because it was a consistent thread in every interview that we conducted throughout this process. We heard countless times how important it was for the teams that run no huddle schemes to have an unwavering belief that adding the no huddle to their offensive system would help them reach their offensive and team goals. The coaches that responded to our survey gave us some insight into those goals by rating the importance of different potential reasons for implementing the no huddle.

Below are the results: 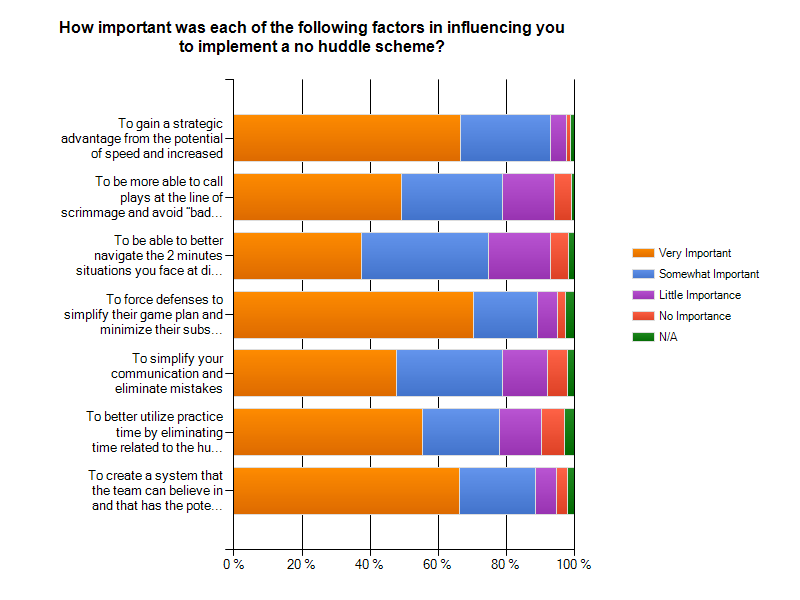 Here are a few things that we ascertained from this chart...

“Very Important” was the top response for each of the seven reasons given. This shows just how motivated coaches were to install these systems and how vital they saw them to helping their teams succeed.

The highest number of “Very Important” and “Somewhat Important” responses connects to the strategic advantage gained by a faster pace of play. This implies that while not all no huddle teams are moving at a breakneck speed, many of them at least want the option to do so if needed.

One of the top reasons that coaches choose to use the no huddle was because of its power to bring identity to their football program. Coaches told us how the no huddle and all that comes with it gave their kids and coaches more confidence and allowed them to create more excitement around their program.

Many teams went to the no huddle to simplify their communication and eliminate mistakes. To those who have not used no huddle schemes, this may seem counter intuitive. Hopefully the next section on Communication Systems Analysis will help clarify the simplicity argument.

While the vast majority of those surveyed spoke positively about their no huddle experience for the reasons above, they also cautioned that the transition to the no huddle should not be taken lightly. We were repeatedly told how important it is for the no huddle to become part of the team’s culture and identity for it to really have an impact. Coaches also stressed the need for the entire coaching staff to understand the impact of a no huddle tempos on the different parts of their game be it defense, special teams, or off-season preparation. Once everyone is on the same page, teams can then start to dig in to the different ways that they can install and operate their no huddle concept.

According to our research, no huddle offenses score more points than traditional huddle teams. One could argue that this would be the case regardless of any strategic advantages that are garnered by the no huddle. There also is a certain amount of scoring that increases because of increased opportunity. In other words, teams that run more offensive plays and have more offensive possessions have more chances to put points on the board. Many of the coaches we talked to in creating this report cited the desire to increase opportunities as a reason for their particular brand of no huddle.

One great example of this focus comes from Chuck Markiewicz the longtime head coach of Arundel High School (MD). When asked about his no huddle scheme Coach Markiewicz explained that...

“We didn’t try to do this all in one year. Our goal was to try to add something every year, test out our theory to see if it held up and add more the next year. We feel like our ideas have some merit because since we started to implement the changes in 2005 we have averaged over 42 points per game. We are still actively engaged in trying to find are still ways to add more possessions.”