One of the biggest negatives to running a tempo offense is the potential for running or throwing into a bad look. The concept of being able to call multiple plays while using a single code word allows for protection against this. We have incorporated 3 of our base runs with a base quick game pass and included an RPO / Relief into one-word calls that include the formation, play direction, and snap count.

In our system, the one-word calls are communicated to the players through signals and large posters. Each run concept is paired with a specific formation and the one word call also determines whether the formation strength is to the right or left as well as determines which direction the play is to be run. For example, all our one-word calls may consist of NFL cities for plays run left and NFL nicknames for plays run right. With the one word, we always let the linemen know which direction the run play is to be run and we then rely on the skilled players to know which side to set the formation. For our 3x1 Inside Zone we may call it Cleveland or Browns. If the call comes in Cleveland the “L” tells the line we are running inside zone left and the receivers know that the corresponding formation to this play is Trips Right. The call is then echoed by the players to insure they line up as quickly as possible and are ready to execute the play at the ready-for-play whistle. It is then the QB’s responsibility to run and execute the correct phase of the one word play that is called.

In regard to usage, one of the best things we found out about the one-word calls is that they are effective in most situations. There were times when we felt our team needed a little boost of energy so we came right off the sidelines using them to start drives. We also used them frequently after a big chunk play when we felt we had the defense on their heels. Most often, however, we used them when we wanted to play as fast as possible at a time when we felt the defense was tired or vulnerable.

The other aspect of these calls that we really liked was we could call the same play multiple downs in a row and not worry about the defense hearing the same call. In addition, playing at break neck speed forced defenses into base calls and limited what they could do in regards to their blitz packages and coverages.

Our base run is inside zone, which we like to run weak out of a 3x1 set with a tight wing. We have married our inside zone weak with a quick hitch to the single receiver. Any time the quarterback has a free line of sight to the hitch we want him to take it. If he does not like the hitch look he quickly checks our #2 receiver for an uncovered bubble look. If #2 is covered he executes our inside zone read. The RPO happens if the QB pulls the ball on zone read. He will then attack and read the flat defender thinking run until the defender commits to him at which time he will throw the ball to our #2 who has slow played his bubble technique. 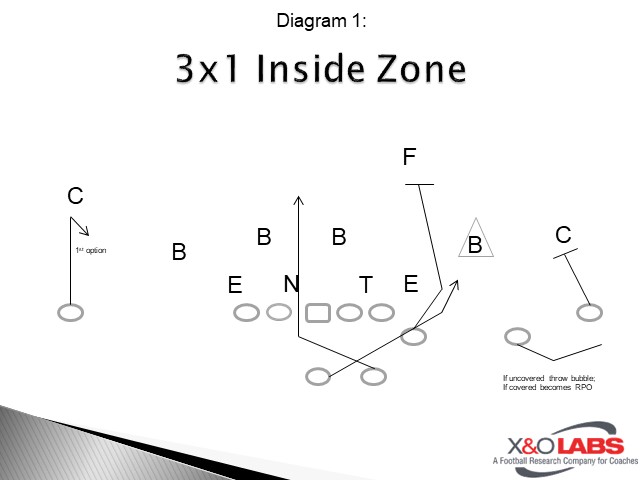 RB: Run inside zone weak. The QB will alert if he is going to throw free release hitch to know to stay out of his way.

Inside Receiver (W): If uncovered run full speed bubble; if covered crawl to bubble (make sure to always stay behind QB in “pitch relation”)