Seeing a play call go from abstract lettering on a play sheet to 11 players aligning in perfect spacing on the field, and executing the movements and schemes accurately is one of the most beautiful aspects of our sport. Being a play caller can make you feel like an artist. The canvas stretching before you may be green already, but your creativity and ingenuity can allow you to paint a masterpiece on any given play.

The methods in our sport are as diverse as the mediums used in an art studio. I have a tool that I believe can help all coaches simplify their artistic process. From the most complex systems, “U Zap to West Right Tight F Left Fake 99 Toss Crunch Naked Right,” and an NFL favorite “Shift to HB twin right open, swap 72 all-go, special HB shallow cross, wide open”. To the simplest, “Y-Over 121” or “Trips Left Late 93 H-Wheel.” We all want to be as efficient as was can at creating great football. If you are a west coast offensive coordinator looking to get your formations and shifts in quicker, or an Odd stack defensive coordinator hoping to speed up your front adjustments, I believe that a flip-card system can help you become more efficient. Even if you already have hand-signals, I believe flip cards cannot just complement any hand-signal system you may already have but enhance it as well. No matter how deep your staff is, this can help you top to bottom in any of the three facets of the game including special teams.

When I first started using this system the goal was to create a fast and easy method for calling formations so that I only had to hand-signal a play call. I wanted not only to be multiple, but also be quick so we could be up-tempo when we needed to be. When I stood and looked at our hand signals from the player’s standpoint, they were good, but they were limited by two hands. I knew that some would require a three signal movement, and every time one hand progressed to the third signal, I would lose the first for a moment. By creating a three panel frame, and hanging cards from it, I was able to leave the formation up on the cards through the whole play call, and it was stagnant – no waiting for the signal to start over to get set. This became particularly helpful when it came to our motions and shifts. It was painfully frustrating when looking at the signaler who was responsible for motions and formation when he would have a movement signal that wasn’t clear enough and then go straight to the formation. I needed a better way for my guys, a faster and easier way for them to see and understand the call. That is when I came up with the formation cards. I categorized all our formations by the “Set”, “Adjuster”, and “Backfield”, and broke the panels up to correspond with this. I wanted to compartmentalize the information for them, so that guys only had to remember small chunks, or “rules” about formation-creation. If they could learn the pieces, I could create any formation I wanted by mixing them up.

Formation “sets” can be described as the coordination of the 7 players who align on the line of scrimmage in the formation. In the first version of the cards, I used a three panel frame and basic formation sets to accommodate a multi-personnel offense. Three sets made up the skeleton for everything: both ends Split, One split and one Tight End and Double Tight End. The same can be true of any offense. For example, if you are a flex-bone team, you can fix your formation sets up to allow freedom for your B-Backs to align anywhere, and put your best backs where you need them. 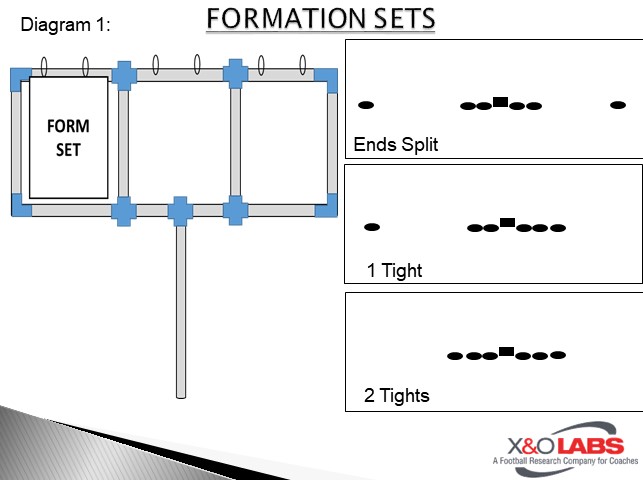