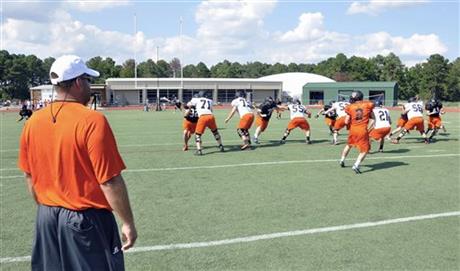 Their responses are left anonymous because, well…like we said communication is everything in their system. It’s the tight lipped, CIA style of these no-huddle signal callers to not tip their hand. But they did disclose the method by which they design their communication and we segmented their responses based on whether they are high school (prep) or college coaches. The participants to the study are below:

Explain how you teach your quarterback to identify defensive fronts. How many types of fronts is he expected to identify? How do you name or tag these fronts?

“When it comes to identifying defensive fronts, the only thing I concern my quarterback with is counting the front and deciphering between—in most cases—an even front with four defensive linemen or an odd front with three defensive linemen. Although we do, on occasion, witness bear fronts (50 or double eagle front) and a 6-man (6-1) front, those are extremely rare for us. There are typically enough other factors on the back-end, such as press man coverage and the presence of a single deep safety that tip these rarities off and allow us to adjust accordingly. Otherwise, we can expect a basic even or odd front. Once our quarterback determines 4 or 3 down linemen, he is conditioned to simply reduce his math down to two remaining variables: How many second-level defenders are there? Once that is determined, he can, more or less, make an assumption about the coverage. For instance, if there are four down linemen, then the only remaining question is, where are the other seven defenders located and how are they configured? The second question is, how many safeties are there? The quarterback should be able to gather a significant amount of intelligence prior to the snap of the football based on the simple determination of how many defensive linemen there are. Because there are too many variables involved with various run blocking schemes, we do not expect our quarterback to concern himself with specific DL techniques. We don’t run the inside zone only to a 2i, and we don’t only run power to a 3 tech. Because we encounter such different DL nuances from week-to-week, we don’t spend a great deal of time coaching the QB to check those plays either way. We teach our offensive line to block vs. best-case scenarios and worst-case scenarios. This allows us to play fast and limit the amount of information our QB has to process on a given play.”