Can Your No Huddle Run Faster? 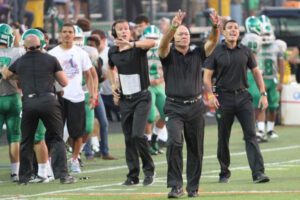 Here at Arundel, we believe very strongly in General George S. Patton’s famed saying that "an imperfect plan implemented immediately and violently will always succeed better than a perfect plan."  No part of our program better exemplifies that concept than the no huddle principles that we use to run our offense.  This article will cover in detail the way that we practice and employ different tempos and the communication system that we use to make it all happen.  As the quote above implies, these plans are by no means "perfect" as they are always a work in process.  The entire system has been derived over time from a wide variety of sources.  The key is that we worked to find out what worked best for us.

Our No Huddle Evolution

Our no huddle experiment all started with our team goals.  When I was a defensive coordinator in the 80’s, I was paranoid about all of the options that were open to the offense when we sat in one defensive look.  Later, when I became an Offensive Coordinator, I decided to put what I had learned on the other side of the ball to use and limit the looks that a defense was able to give us.  That is where the no huddle came in.  We combined the no huddle concepts with our Run and Shoot offense (from John Yaccino, Penn Trafford HS (PA).  From there our OC, Dave Doy, spearheaded the development of the system that we currently employ here at Arundel HS. We have found that a major key is to keep an open mind to ideas that fit our philosophy of coaching and playing the game.

The Importance of Possessions

We didn’t try to do this all in one year.  Our goal was to try to add something every year, test out our theory to see if it held up and add more the next year. We feel like our ideas have some merit because since we started to implement the changes in 2005 we have averaged over 42 points per game. We are still actively engaged in trying to find are still ways to add more possessions.

Here are some of the things that we have used to create additional possession:

In addition to the possessions goal in place for the team, we created a set of goals and priorities for the offense that were aligned with the team philosophy.  Here is what our offense is trying to do: