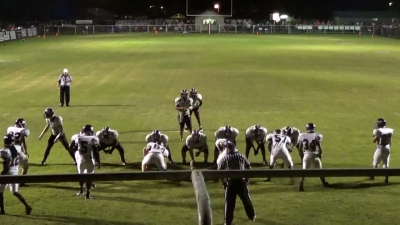 Everyone in America either ran or defended the normal Zone Read over the last ten years. A few years back, I noticed when Auburn played Oregon in the National Championship game that Oregon was trying (unsuccessfully thanks to Nick Fairley) to read defensive tackles from the gun. I got out the trusty white board and started tinkering with things and what has developed over the last two years has given us ways to affect defenses giving them the same look as our base plays.

Essentially, this play is the same concept as Midline just done from the gun (Diagram 1). For us, the most challenging part was coming up with a way to communicate this to our players. We found that naming the defensive tackles and tagging them onto our base run plays was the simplest and most effective way to make this happen (seen below). 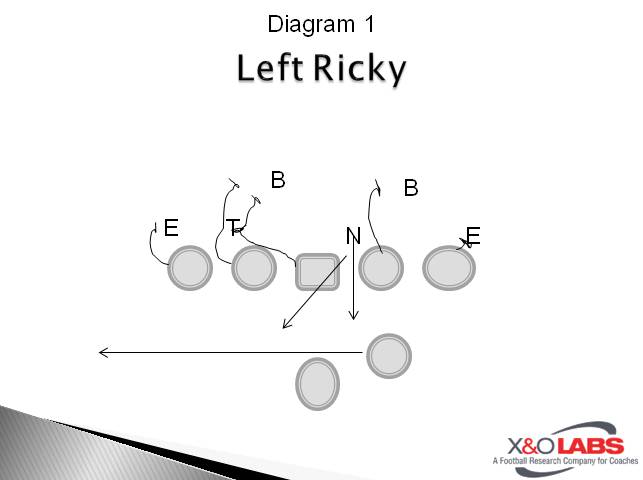 We first started tagging the reads to the end of our Outside Zone play. Let’s say, for example, that our Outside Zone play is called Right and Left. If we go left, we are automatically reading the back side end so we don’t have to tag him. We simply call Left and off we go. We see lots of teams that put the 3-technique away from the back to help with the Zone plays. So if we want to read an active 3-technique we would call Left Larry (Diagram 2). Now the back side tackle just latches onto the back side end and we read the three. On the front side, the tackle reaches the defensive end to protect the give for Outside Zone. The guard lets the 3-technique go and goes as flat as possible to the play side inside backer. The center and back side guard combo up to the back side linebacker. We don’t read the front side DE a lot off of this look because we run Power Read, but it’s not overly hard to have in the bag just in case you need it. We call him Ed and can tag him if we’re worried about back side run through on Power Read. 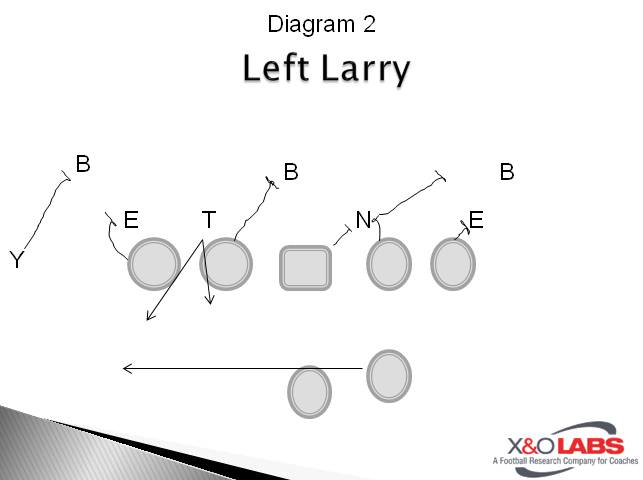 To see video of first level defender reads, click on the video below: