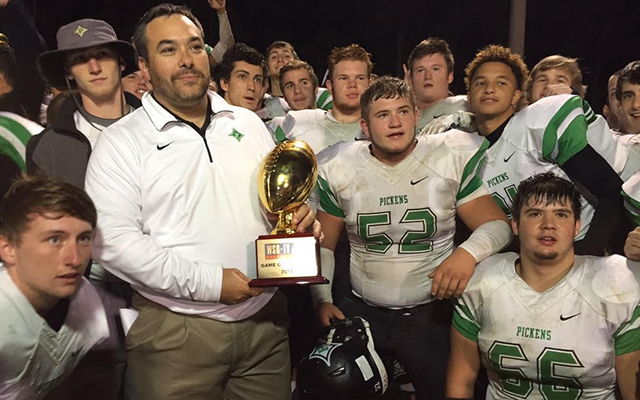 Like a lot of people, we run RPOs and try to take advantage of what the defense gives us.  As we get into the Red Zone, we have found that the RPOs can be a little less effective.  To work against this, we have utilized our Bunch package more in the Red Zone to create favorable matchups when the spacing is not as helpful as it is in the middle of the field.

When utilizing a Bunch formation, you should start by understanding how to attack the flank and force the defense to defend the flank. Some people do this through the run game and others through passing. The quickest ways to establish the flank for us in the running game is to run Power Read or Buck Sweep. In the passing game, we establish the flank by running Scat. 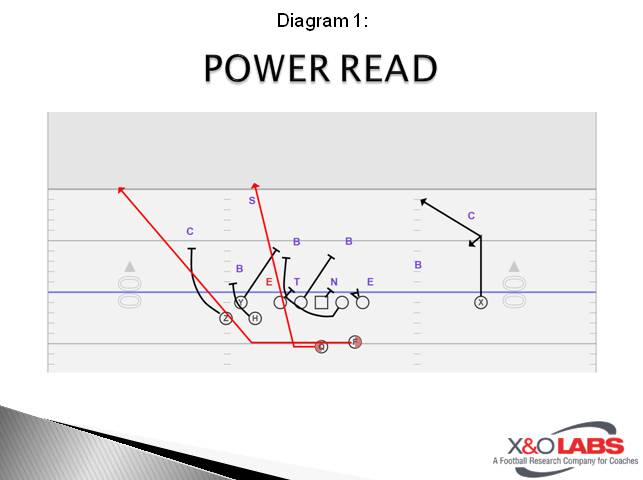 Power Read is a base play for us.  We like it in space in the open field but as the defense get closer in the red zone, the secondary force becomes a problem.  Running the play out of bunch can create different alley runs for the secondary and cause confusion that will allow this play to still attack the flank.

Y: The Y should crack the 1st inside linebacker.  If he gets up-field before the Y can get there, he should go on to the next most dangerous man on that same path (backside backer, safety, etc.). His block on the ILB only matters if we give the ball on the Flank run. Getting this block is key to getting big yards on this play.

H: He is responsible for the outside linebacker. This is the hardest block. When we executed this block we have always gotten an efficient play. He should attack the defenders outside shoulder and keep running his feet. Ideally, he will hook him and we will run outside, but if the defender stretches the play, he should push him out and allow cutback by the runner.

Z: The Z is responsible for the Corner or whoever is the outside force defender. He needs to attack wide and be ready for quick support from the Corner. If he gets quick support, he has to take the same approach as the H and try to hook him but stretch him if he can’t hook him. If the corner sits, he can use a traditional WR stalk techniques.

To study game cutups of this concept, click on the video below:

Editor’s Note: Coach Parker provided commentary and coaching points on each clip below: