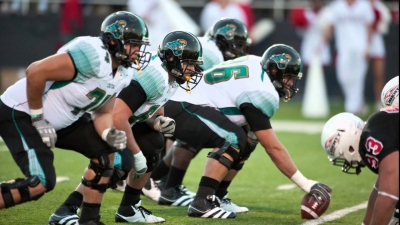 What area of the field do you consider the red zone?

EL: “We talk about +25 and in because that’s where we are in real-easy field goal range. It determined based on the kicker.”

DP: “We call it the +25 and in, but I don't see teams changing what they do until the +10 yard line going to more bracket coverage or man pressures. That’s where it changes.”

GS: “We start on the +25 yard line because the field is shrunken at that point. That’s where the defenses will start to change coverages. Many will play cover zero and run with underneath receivers.”

What is your overarching plan of attack in the red zone? How is your philosophy in this part of the field different than in the big field?

JG: “Number one is attitude. We have to have an attitude of success. Open your focus and open your concentration a little bit more. We evolve depending on where we are on the field. As we get closer to the goal line, our offense evolves.

EL: “We take the deeper opportunities out of the menu. We need to be efficient in the run game. We need to be on schedule. Because it’s so tight down there, we do a lot more QB run game and wildcat runs. We don’t do a lot of straight five-step drop in the red zone where we are reading horizontally or vertically. It’s a lot more play action down there based off our run game. If they are a zone blitz team we feel good about protections because we are simple in our schemes. If they are a man blitz team, we just look for matchups.”

DP: “It’s all predicated on whether or not the defense is going to change. If the defensive philosophy is that they will be a four front and play cover four all the way to the two-yard line (which we will see) then we will stay with what we run. Because we are no huddle and we move so fast we don’t see a lot of teams changing.  When you look at it statistically, the plays that you call on second down are going to predicate whether or not you can get to fourth and short. We want to always try to get to fourth and makeable. Even if it’s up the field we don't’ want it to be fourth and four, not fourth and one. So what you call on third down will make a difference as to whether or not you can get it to a makeable fourth down. We’re always trying to statistically get us to the best advantage. If we know we are in four down territory inside the ten-yard line you’re thought process is going to change because you have four plays. Sometimes we will say we need three downs to get in and then get a kick, which we will do in situations where we are way ahead. But if you go in with four downs to score a touchdown, you have to get it to fourth and short. You want to get it to fourth and less than two. First down you can call anything you want. You can use a play action or you can run it. But on second down, you have to get yourself to a makeable third to get a makeable fourth. We want to stay away from being fourth and four or more.”