Editor’s Note: Coach Zaunbrecher (EZ) coached 34 years at the FBS level, including a three-year stint at Marshall as the Offensive Coordinator where he tutored QB Chad Pennington and Byron Leftwich and spent a five-year duration at the University of Florida in the same role while developing Rex Grossman.  He currently runs the Ed Zaunbrecher QB School (http://www.ezqbcoach.com) developing young QB’s into leaders.

Step 1: Know the Tendencies of Your Defense Opponent 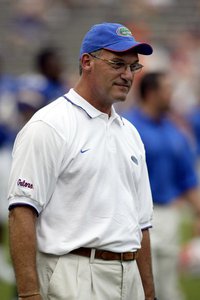 Most coaches know that in preparing a game plan for the red zone it is crucial to study the upcoming opponent to see what they do on defense in that area of the field, but even that concept is not specific enough. You must understand if they do change and where on the field those changes begin. These areas and concepts vary from team to team and are not etched in stone.

I always like to start the study at the 25 yard line. The first section of the red zone continues through the 13 yard line which we’ll call the ATTACK ZONE. This area can show the attitude of a defense if they make drastic changes. Some go from not blitzing to major blitzing to make a big play and switch momentum. Depending on the time left and score, it could be to keep you out of field goal range. Other teams stop blitzing here and try to make you earn your way on a short field. There are usually not defenses specifically for this area but rather how and when they are used.

The SCORE ZONE starts at the 12 yard line and extends to the 4 yard line or wherever the opponent likes to go to a GOAL LINE defense. If they never go to a heavy package it goes all the way to the goal line.  This also applies for two-point plays. This area of the field does have a higher chance of getting a defense special for the situation. Many teams are playing some variation of quarters coverage by playing 7 players across. The 12- yard line is the farthest out they play the coverage because the depth of the end line gets too great. Most teams will wait until the 10 yard line. You need to observe how they play the coverage if they do. Some drop to specific spots such as 2 yards deep in the end zone while others use more of a matchup zone principle.

When designing your red zone offense, there are several questions you need to ask yourself when putting your game plan together.  The questions I would always ask are as follows:

Once you have completely scouted your opponent’s tendencies in the Red Zone, now it is time to develop your "menu" of must-have concepts to attack this area of the field.  Although they are certainly not limited to the selection I include below, in my experience I’ve found that utilizing these types of ideas can produce big-time results.