In order to meet the projected 95% rule in game planning, it’s important to define what efficiency is. According to Coach Longo, it’s something that should be pertinent to both the situation and play concept. This may not follow the conventional wisdom of taking the number of times a play is called and base it off the average number of yards it gained. That former belief is one that Coach Longo subscribed to back when he started coaching. But now he bases offensive efficiency off the two elements he game plans against defensive structure and defensive personnel.  "Basically, it's the minimum amount of yardage we would accept on that route and still feel it's efficient," he said. "But if we were throwing a hitch on a corner that we feel we cannot gain four-plus yards on or against a coverage we should not be throwing it against than it's not going to be efficient."

Since Coach Longo's system is grounded in the Air Raid, his pass game is measured differently. It's quantified more on the specific route that is built into the play concept. Each route has an efficiency number that doesn't change from week to week. For example, drop back verticals have an 18-yard efficiency goal, whereas now verticals off press have a 12-yard efficiency goal. Digs have an efficiency goal of 8 yards while hitches have a goal of 5 yards. These are not general numbers that are arbitrary in nature. They are based on the route structure. “Let’s say the hitch by the wideout is open five out of five times and we throw the ball out there and complete it for five yards and he gets tackled,” said Coach Longo. “So why have a random efficiency number of 8 yards per play if the hitch is what the defense is giving up? That doesn’t tell you the play is efficient.”

These numbers are all tied into the concept being run. Take a generic levels concept as reference. 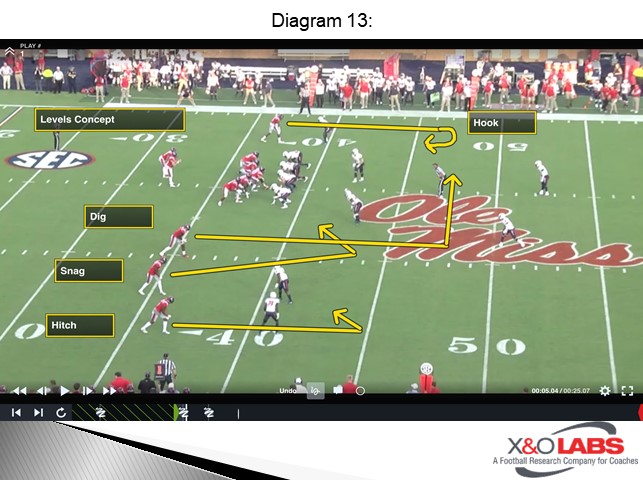 "The first look on the concept is the hitch," said Coach Longo. "If it's open and gets completed for five yards it’s considered efficient. The second read is the dig. If the dig is completed, at eight yards it’s efficient. All we want to do is complete it to the route for the yardage the defense would give us.”

The point of this method is for coaches to take each concept in their offense and design their own efficiency goal based on each individual concept. At the end of each season, Coach Longo will conduct an efficiency study based on each play concept. This information can be used to change or adjust efficiency models moving forward. “We will go back and look at the 11 Levels concepts that we ran and decide if the ball went to the proper place,” he said. “If the ball didn’t go to the proper place, it was an inefficient play. If we got lucky and threw into coverage and the ball got tipped but we caught it, we are not calling that an efficient play. If we throw a swing into coverage and the running back breaks a tackle and gets yardage, that is not efficient for us. We have to throw the ball to the right guy in the right progression. When we do, we should get the yardage prescribed. If we run 10 Levels concepts and the ball goes to the snag five times and he gets the yardage prescribed, that is five efficient plays. If the quarterback goes to the dig and overthrows it or we drop it and it's incomplete it's inefficient.”

His game plan is more about his players and not their players. This is why he builds in play concepts that can answer multiple defensive presentations. "A play has to be able to answer everything," he said. "And 95% is everything to me. You need something you can answer most everything. When it's not everything that means a defense needs to be extreme to beat us. So, we spend our time looking for the answer for the extreme. They have to do something extreme where we don’t have an answer. Our responsibility is to have that answer.”

In this course, we present our research on how Coach Longo applies the projected 95% method to game plan against defensive structures. We will also take readers in-depth into a work week of how Coach Longo and his offensive staff prepared against a particular opponent’s tendencies this past season in the SEC. But before we do, we wanted to make an important clarification: Coach Longo doesn’t spend a lot of time studying call patterns of opposing defensive coordinators. He’s more interested in studying the “defensive approach” structurally that these coordinators engage in. “To us, it's all about the system," he told us. "Like are they four-match teams or cover one man free teams? Or are they a big cloud team?”

The process of preparing against potential opponents starts in the spring for Coach Longo. When spring ball ends, he’ll start organizing his thoughts to prepare against next fall’s opponents. The process gets culminated after the summer when he’ll have the base of his game plan thoughts together. By the time fall camp rolls around, he’ll have a “good feel” of how they may attack each opponent. We will elaborate upon the process he uses, the same one he used while as a high school coach in New Jersey. Sure, the process has changed somewhat as an FBS level offensive coordinator. “The biggest difference from each level is resources,” he said. “As you move up they spend more money on those staffs. I can focus on watching the film and getting to know the opponent which in my opinion is the most important thing I can do. I’m not distracted by the other things because my (former) graduate assistant (now offensive analyst) Josh Snow does a great job handling those duties.” Now he doesn’t make the cutups he uses during meetings. He leaves that to Coach Snow. “He emails me a script template. I write it and send it back to him. The majority of the time now I spend recruiting and coordinating the offense.”