Editor's Note:  Coach Scott is the offensive coordinator at Old Dominion completed his sixth season with the program in 2012.  Prior to the 2012 season, the ODU offense under Scott was one of the best in the nation, ranking in the top-10 nationally in several categories. This season the Monarchs led the FCS in scoring offense with 45.15 points per game, passing offense at 393.85 and total offense with 548.23 yards per game.  In 2009, Coach Scott was among the four finalists for FootballScoop.com's D-1AA Coordinator of the Year.

The success we have had in our program at extending the play stems from our overall offensive philosophy of running an up-tempo offense at a high rate of efficiency. Our system is simple which makes us efficient, we refuse to have "paralysis of over-analysis", we cannot execute our system with the speed and tempo that we need if we are over thinking. The success that we have comes from our quarterback; he must be a great decision maker and put our offense in the best situation at all times during the game even when a play breaks down.

Quarterbacks must always bring calmness to the offense, even amidst the "chaos". Our rules are simple; just take what the defense gives you.

Again, we KEEP IT SIMPLE. This allows our quarterback to react "on the fly" and make plays when things break down. There are very few plays in a football game where everything happens the way it is drawn up in the playbook, our quarterback needs to adjust and make the best out of every situation.

In scramble situations we keep the rules simple for our receivers; the biggest thing we preach is that they must get in phase with/in the vision of the quarterback. If the quarterback cannot see you while he’s running for his life then you are no longer a viable option for him. We give our players a lot of freedom in our offense so that they are able to do the things we recruited them to do, which is simply make plays. The rules for our receivers in a scramble situation are as follows: 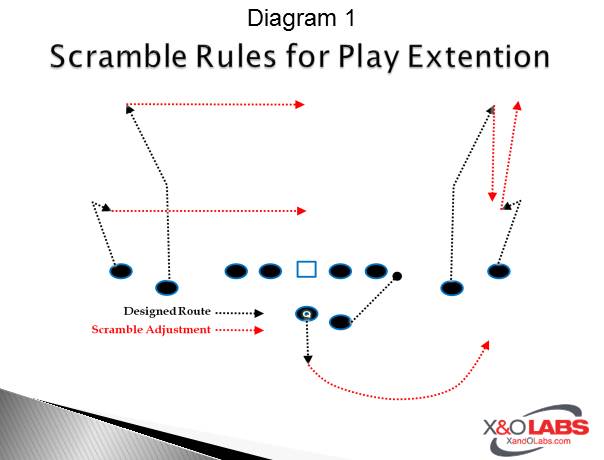