Multiple Variations in Getting Play Makers the Ball

You probably have that one player that is just better with the ball in his hands than the rest of the guys on the team.  When he has the ball good things happen and the more touches he can get the better your chances become.  If that special player is not your running back you have to be very creative in how you get him the ball.   We are a shotgun inside zone heavy team and our dynamic play maker (DP) just wasn’t the type of player that we could just hand him the ball in inside zone and be that effective.  We had to be very imaginative in how we got him the ball.  We moved him all over the field and used him in an assortment of ways.

Concepts for the “DP” in the Slot

The first way we got our DP the ball was to align him in the slot and run some simple jet sweep.   We would run some empty or end over formations to get the number advantage on the perimeter. This is your typical jet sweep that almost every team runs. 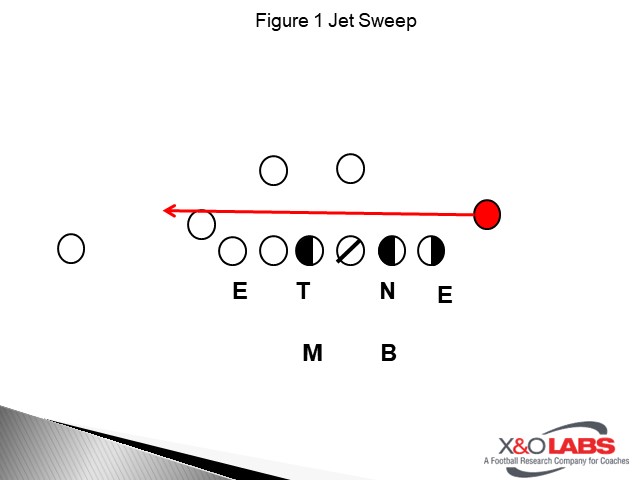 This formation was the most successful for us running jet sweep and enabled us to get the ball on the edge to our DP with some good blocking angles.   The first clip we are in a TE/wing formation with a wide receiver split wide to the same side.  In the 2nd clip we are in an empty formation with two receivers on the line of scrimmage.   A key coaching point f or the DP to cut down his split and snap the ball on first sound.  We do this to slow down the defense from recognizing the play and less likely to react to the motion.  We also would tag the play with a word for the outside receiver to crack and have the back on the corner.

To study game film of these concepts, click on the video below: