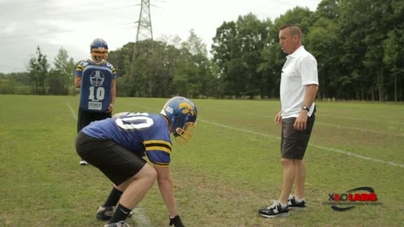 In a 25-year career as an offensive line coach and clinician for youth, high school and college coaching staffs, I have come to one conclusion: Teams have way too many running plays with varying blocking schemes in their offenses. They block one play this way and another play that way. For example, they think if the 3-technique shifts to a 1-tech a different play must be called. I have always subscribed to the K.I.S.S. (Keep It Simple Stupid) methodology, especially for the big guys up front. The offensive linemen do not care about all the creative ways you can get the ball to your best player and all the window dressing used to do so. They just want to have great confidence in knowing what step to take and where to take it.

Regardless of the offense, most running plays can be categorized into one of three offensive line schemes: Zone, Gap or Man. Instead of having a dozen running plays with a dozen different blocking assignments, consider grouping all of your running plays into one, two or all three of those schemes. Once the offensive lineman understands the scheme, he can easily adapt his technique to the play. For example, if Iso and Lead Draw are both Man schemes, the playside tackle just needs to know he has #2 on the LOS (which is mainly the defensive end). The assignment is the same, but the footwork may change. For example, if it is an Isolation play, he takes a run step with his inside foot. If it is Lead Draw play, he will pass set with his inside foot first. Its two different plays blocked the same way with the same leverage with just a change in technique. Basically, it's two plays for the offense that the defense has to defend but only one scheme for the O-Line to learn.

Before I begin grouping running plays into the three "run families," I'll define the 5 run steps that the offensive linemen will use on the plays. Although this may sound elementary, it's essential that coaches teach all footwork techniques first so that players can identify their technique based on the play concept. The first is a "Base" step. A base step is a vertical step straight ahead where the heel of the foot you are stepping with will replace the original alignment of the toes of that foot ("heel replaces toe").

The next step is "Reach" step. A reach step is a vertical step as well but with lateral displacement. With a reach step, the offensive lineman gains ground vertically and laterally. The vertical distance of the step is the same as the Base step: heel replace toe. The lateral distance will depend on the alignment of the defender Base and Reach steps are both vertical steps. The shoulders of the offensive lineman will stay square to the line of scrimmage.

The third step is an "Angle" step. Angle is a 45° angle step forward. Again, the heel of the foot taking the Angle step does not go further than the original alignment of its toes.

The next step is a "Bucket" step. A bucket step is a backward 45° angle step. After the step, the toes of the foot taking the Bucket step will be at the depth of the original alignment of the heel of that foot. Both the Angle and Bucket steps get the shoulders of the offensive lineman turned at a 45° angle.

The last of the run steps is the "Pull" step. The Pull step is a 90° step towards the sideline. The alignment of the heel after the step should be directly behind its original alignment.

Following the example used in the opening paragraph, we will begin with a Man scheme. Each offensive lineman is assigned a defensive player which allows for the most accountability. There can be no excuse of "your man" slanting to someone else's gap. It also allows the coach to tell the RB with great certainty where the hole is going to be. In a Man scheme, the Guards will block #1 on the line of scrimmage (DT) and the Tackles will Base step with their inside foot to block #2 (DE). The Center has the Middle Linebacker aligned over him (4-3, 3-3) or the back-side ILB vs. a two Inside Linebacker front (4-4, 3-4).

Man Concept vs. Even Front

If the Center is shaded by a #1 (DT/NT), he must combo with that Guard to his LB.