Researchers’ Note: This report was written by the coaches on staff at Game Planner Pro. Game Planner Pro is an easy-to-use, web-based game plan management software that allows coaches to enter in their game plan once, at the beginning of the week. The software then automatically creates the wristband, practice scripts and game day call sheet. For more information on Game Planner Pro: Click here. 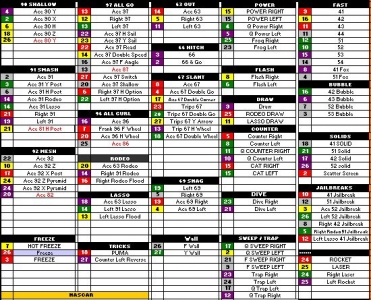 Does this scenario sound familiar?  You spend all week studying film, opponent tendencies, drawing plays, teaching your players in the film room and on the field; you have put together what you thought was the perfect game plan only to see your team fall short.  The next day you study the film and all you do is ask yourself why did I do this or that?  Why were we trying to be something that we are not?  Your film session reveals players making mental mistakes and not playing like they are capable of playing.

Here are four reasons why coaches sometimes find themselves in this situation.

It never fails, you are watching game film on your opponent and another team is just moving the ball up and down the field at ease, you think to yourself we could do that.  The problem is, the other team is built to throw the ball 60 times a game and your team is built to run 60 times.  You watch the passing schemes that they are having success with and you immediately run to the dry erase board to draw them up and install them in this week’s game plan.  It is okay to borrow one or two plays from someone else but you don’t want to change your offensive identity week-to-week.  Teams become good at what you do by committing to it and practicing it, over and over.  As a coach you get a better understanding of what defensive schemes may give you problems and how to make in game adjustments because you know your offense inside and out.

Mistake 2: Eight Pounds of Potatoes In a Six-Pound Bag

Another very common offensive game planning mistake is trying to add too many wrinkles to a play.  Most commonly this will happen when an offense is moving the ball down the field well. At some point, you will likely get greedy.  Instead of just lining up, running a play and trusting that your players will make the right decisions, you try to give them too many checks.  It always seems to start off very simple, if they give us a certain coverage we should throw a quick screen, if they give us a certain front but the LB is out of place we should check the run to this gap.  So what starts off as one play now has two or three different components to it.  The offense is now at the line of scrimmage thinking about what they might have to do on three separate calls instead of just one.  It’s going to slow them down and they will not be as successful as they could be.  Remember all eleven players have to be able to execute the play, not just the quarterback.