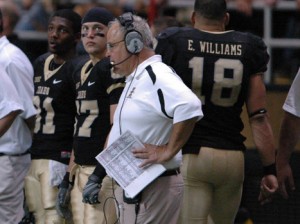 Now the offense finds itself in a 3rd and Long (10 or more yards) situation.  The good news is a 3rd and 10 situation is certainly a more manageable 3rd down situation than, say, a 3rd and 20 situation. Early in the game, with the game still well in balance, the thought might be to play it safe on a 3rd and 20 yardage situation. The offense could run a draw or a screen to see if the offense could be fortunate enough to pop such a play for a long gain. The same could be true for throwing a safer type of pass pattern or route such as a short dig route at ten to twelve yards rather than throwing into deeper coverage and risking a turnover due to an interception. Such a completion may be able to have the same possibility of the receiver being able to knife up field quickly to, possibly, run for the needed, first down yardage. Such safer 3rd and Long play calling ties into the belief that a 10 yard gain, although not converting the 3rd and 20 yardage situation, helps to add 10 yards of field position to the punt. It’s when you must get that 3rd and 20 down and distance yardage that the situation becomes extremely less manageable.

Separate Your 3rd and Long Play-Call List: Many coaches will utilize a separate 3rd and Long/Long play call designation. The feeling here is that there are a good number of pass patterns and/or route isolations that can reasonably get 10 to 12 yards without a lot of difficulty whereas 13 or more yards gets a lot tougher to manage. Rather than having two 3rd and Long designations (Long and Long/Long), I like to list all of my 3rd and Long yardage plays in one ascending order on my play call chart. Patterns that are designed to get shorter, long yardage needs are listed first followed by patterns that are designed to get deeper yardage gains later. As a result, a pass play designed to get the deepest Long yardage gain would be listed last.

Use Your Best Deep Routes:  No matter what the 3rd down yardage need is, the offense needs to use their best, deep yardage pass patterns and routes. For me, that would mean utilizing some form of Four Streaks vertical attack. Of course, what the opposing defense has shown it does in regard to covering such 3rd and long situations will have much to do with the pass plays to be utilized. Attacking downfield quickly with Streak, Fade and Post routes is a great aid to the pass protection needs of the offense, not having to hold up as long on the quicker released deeper throws. In addition, completions to such routes often lead to an excellent ability to run for big chunks of run yardage after the catch. Longer developing deep routes such as Post-Corners, Post-Corner-Posts and deep, crossing Dig routes can also offer excellent deep throw opportunities as long as the pass protection can hold up.

Some coaches believe in allowing their receivers to increase the deep yardage of their routes to help achieve needed 3rd down yardage. Coaches need to be very careful with this thought. Timing and pinpoint route running and throwing are normal requirements for pass game excellence. However, there are programs that allow, teach and carefully drill such allowance for a receiver to break his route deeper, and sometimes shorter, so that a receiver is constantly working to "….green grass." The teams that successfully do this, however, are often die-hard throwing teams. They often have limited patterns and routes so that route depth flexibility is built in to a team’s pass game structure and are practiced so accordingly.

Use Max Protection:Maximum pass protections can be effective if opposing 3rd and Long defenses are blitz oriented. A problem here is that teams can blitz one time and fake blitz with maximum coverage the next. To prevent defensive maximum pass drop coverage effectiveness, three man patterns to a three-man trips formation can be extremely effective.

Develop the "Stick" Route:  Some coaches will run Stick routes on 3rd and long situations. The term Stick extends the route stems of certain deep routes such as comeback outs and deep hooks five yards deeper than the forward, down and distance chain marker signifying where the needed 3rd down yardage point is. The receivers, initially selling a Streak route, will then plant the foot opposite the final break action and drive back down an outside comeback-out break or a deep hook break that works to the quarterback. The concept relies on a great, deep push of the top end of the 3rd and long defensive pass coverage. Such action helps to create a void between the deep coverage and the underneath coverage for the receiver to work into. The deep Streak threat is paramount to the success of this concept.

Now Is the Time for a Trick:  How about utilizing a special or, possibly, trick play on a 3rd and Long or Long/Long situation? Why? …. because it’s late in the game and you are, unfortunately, behind on the scoreboard. It’s 3rd and 23 (or 4th and 23) and you MUST convert the down to keep the chains moving and maintain a chance to win. In reality, your team is in a desperation mode. Maybe it’s time to use a play from your Desperation offensive series. Don’t have one? Maybe it’s time that you should!

In Diagram 14 (below), the outside receivers run Streak/Hook up Choice routes with an inside receiver Read route for a closed or open middle coverage read. The tailback is shown running a delayed, four yard Option route.

OL: Slide protection.  Line slides away from block of first uncovered line blocker from Center to the play side.  Covered play side linemen block man on.  TB dual reads LBs.