What if I told you a small high school that missed 13 extra-point kicks in 2 years actually scored 97 points in their 95 PAT opportunities over that same time frame?

If you do the calculations, that is a 102% return on PAT opportunities based on conventional football math. Yes we are that team that goes for 2 a lot, and you should know our data shows we should be going for 2 much more often!

In my two years as offensive coordinator at Benjamin Logan High School, we have taken a program that was scoring 13.2 ppg in 2013 (1-9) to scoring 43.1 ppg in 2015(6-4). I follow second year head coach Jeff Fay in creating a mindset in our players that we are trying to score as many points as possible every snap that we are on the field. A huge factor in creating this mentality in our program is our exotic, yet structured PAT muddle huddle concept. We have found this concept very cheap to install (10 minutes from install to scoring more points) and flexible to allow for endless tags and variations. 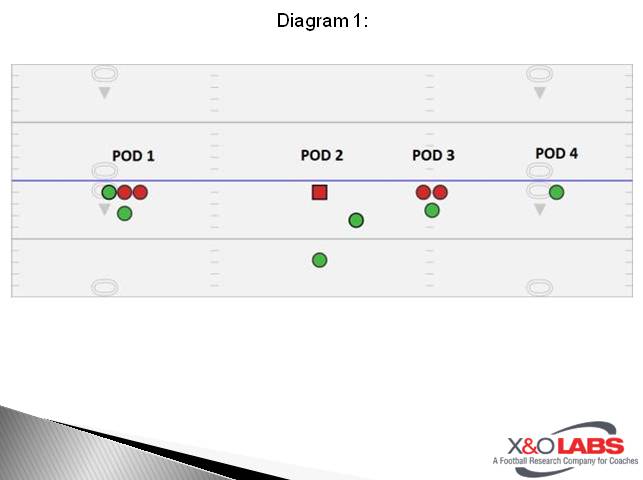 Diagram #1 shows the base formation our players know to line up in as soon as we score a touchdown. The green players are eligible to receive a forward pass, however on a 4th down or special teams play non-eligible numbered players are allowed to line up at any eligible positions as long as they do not receive a forward pass. During team periods every practice our offense drives the length of the practice field. Upon scoring on our scout team players immediately line up in this formation and the kicker is ready beside the coaches with his block. If we do not like the look we get our kicker is ready to sub in for any player and we shift to a traditional PAT formation. Our players understand from day 1 of camp that trying to get a quick 2 point conversion is the last offensive play we run before we celebrate and head off the field.

Diagram #2 shows just how confusing the formation can look to a team who just gave up a big score. 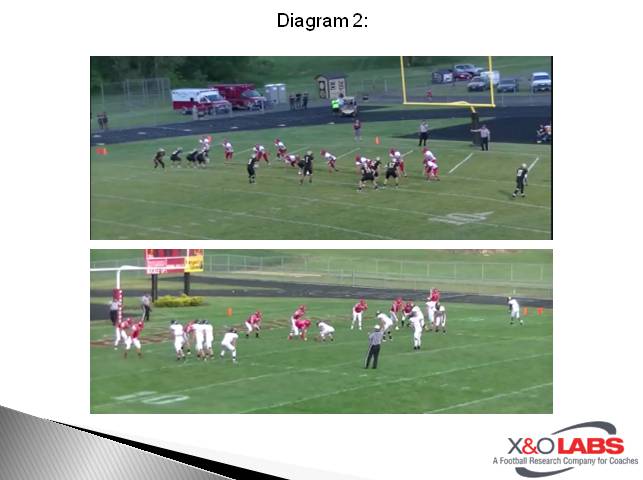 With the pods labeled 1,2,3,4 we are able to see how the team aligns to our formation, or look for a matchup to exploit and then signal in a number of where we want the ball to go. Once that concept is mastered, advanced tags can also be added to the number. We are a tempo offense so all of our players communicate to each other and our coaches through common hand signals.

When we decide we like our match up in Pod 1, we signal in a “1” and the center will wait for the ready whistle and upon grabbing the ball he will laterally flip it to his left. (Diagram #3) This is technically a backwards lateral to the eligible player standing behind pod 1 who will then push into the end zone. The 3 players in front will handle the numbers they get man to man or just wedge block the pod into the end zone. We have found we like the eligible players in pod 1 to be a Tight End type on the line and a RB behind the pod who can catch the ball and make 1 cut into the end zone. 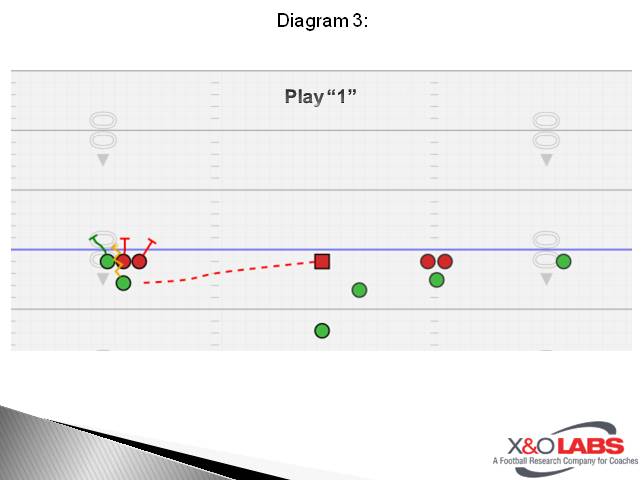 It is important that the center moves the ball LATERALLY FIRST, as soon as a ref declares that he brought the ball UP first the play will be blown dead and you will lose the try. When teaching right handed players the lateral we tell them their first movement is to lean to the left then push off their right foot falling towards the target after they throw. When they step with their left foot first instead of leaning the ball will naturally move the opposite direction making the ball movement slow enough for the ref to blow it dead.