Our offensive philosophy here at Bowdoin College is “Players, Formations, Plays,” and we are very purposeful on that order. We want to be able through motions, formations, or alignment changes, to isolate our best matchups or ensure numbers to where our offense can be successful. Furthermore, because the NESCAC has some strict limitations on practice time and the abilities to meet with players once the season has concluded, we must be very concise and clear with our installs each fall. If our goal is to play the best football player regardless of age, it doesn’t make any sense to design and implement an offense impossible for an 18-year-old freshman to walk on campus and digest. We want to run a few schemes well, and tweak or adjust those to fit our personnel best each year.

Over the course of the last 7 years as an offensive coach (Denison University, Sewanee, Allegheny, and now Bowdoin) in a pistol, spread-based offense, we have run many zone variations, and inside zone has always been one of our staples. Another huge piece of our offense has been centered on simple jet motion from our best perimeter threat. We used outside zone most often and were a true reach and run team. Our tailback was athletic enough to keep in pistol which was huge for our self-scout to eliminate tendencies. He blocked the first dirty-jersey in the alley, inside-out (aware not to cut back to the middle of the field).

When I got to Allegheny College as the offensive coordinator in 2017, our slot receiver was one of the most-feared athletes in the conference. A true burner, he possessed the ability to score any time he touched the football. Thus, his “influence” on a jet sweep was incredibly powerful. We found that by devoting a handful of plays each game to the jet action with the original goal of challenging the perimeter, we were in turn able to dramatically influence the box, specifically in the zone read game.

This became a great fit when we didn’t necessarily have a dominant H-back that could consistently handle DEs on zone/split zone, and our QB was limited in his keep ability on zone read. We needed a way to encourage a handoff while still feeling solid about our numbers and angles, and matching zone read with jet motion allowed us to do just that. We married two different components of our offense without installing any new techniques or major learning, keeping it simple.

On this play, our quarterback oversees putting the slot in motion. He aims to snap the football when the S receiver hits the outside leg of the tackle for our jet motion. Because we want to encourage our receiver to reach the mesh as close to full speed as possible, he tracks the motion in more of a banana path. Flat to the outside leg of the tackle, then bellies to directly in front of the quarterback.

On the snap, the quarterback turns and reads the defensive end towards the side the S will finish his motion. There is no dummy fake or show to the motion-man. Again, with the threat of the S receiver getting outside and finding a perimeter running lane, we are hoping to influence the read key to widen on the snap. Should the defensive end crash, our S now becomes an extra alley blocker for the QB on any keep read (can handle a hard squeeze/scrape). 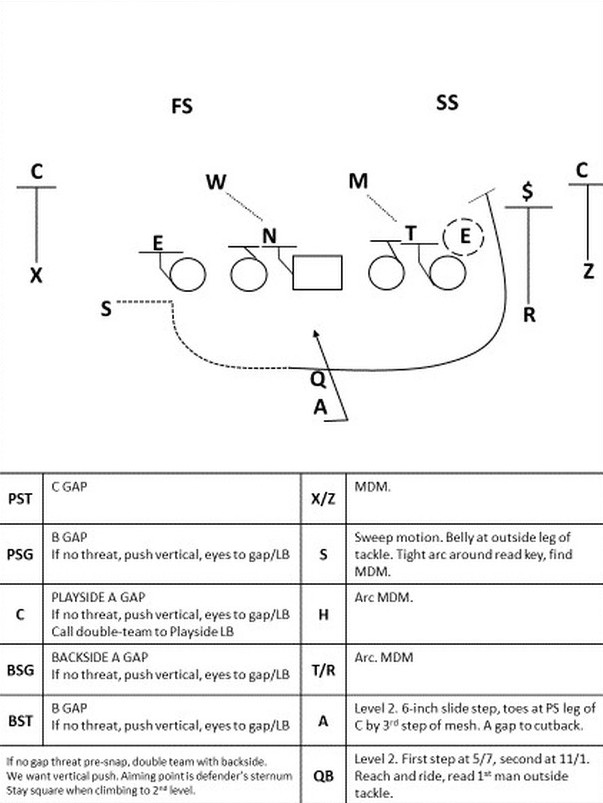 At Allegheny and now as the OC at Bowdoin, we have clear visual keys for what is a keep read for our QB. Another reason we love this zone variation is that is allows us to encourage the give read if we are not the most dynamic runners at the QB position. Unless the defensive end turns his shoulders to chase and reaches a landmark of the BSG on his crash, we aimed to give. Obviously, depending on the ability of your QB, this read changes for your offense.

The jet sweep threat allowed our tailback to feel VERY comfortable with his backside cutback. Our aiming point on the zone play is the playside leg of the center, and our tailback is taught to press the heels of the center, reading the A gap. If we have a solid double team and get vertical displacement, our tailback is free to bang the playside open gap. If he sees a muddy A gap and no vertical push, we teach a one-cut rule on his cutback. He is free to jump-cut and find the open gap all the way back to the C-gap defender.

With the jet motion, we are hopefully encouraging a much clearer C-gap for our tailback. If he doesn’t find playside A-gap to be open, he is naturally thinking “hit backside C.”

Changing the technique of the S on this zone-read variation post-snap has given us the option of now throwing bubble on the perimeter.