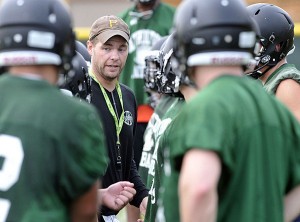 Editor’s Note:  Coach Schmitt has put together a 38-9 record through 4 years as the head coach at Atholton High School.  During that time, his teams have won 1 County Championship and appeared in three Regional Championships during that time.  Prior to his time at Atholton, Coach Schmitt served as a graduate assistant at the University of Maryland and as Tight Ends coach at St. Vincent College (PA).

In 2009, my first year at Atholton, our football team was primarily based out of 21/11 personnel sets running both Zone and Gap Concepts. The success of that season encouraged us to stick with these sets that many would consider a "Pro Style" offense. In my second season as Head Coach at Atholton we started 2-2 and lacked any true cohesiveness or identity on offense. We had an underachieving offensive line and we weren’t correctly utilizing our skill players.  Our offense was a collection of plays, rather than a system. The Offense was diverse and gave defenses plenty to prepare for but little to truly worry about.

At the suggestion of my assistant Coach Jon England, I watched a Friday evening primetime game between Nevada and California. I was aware of the Pistol but gave it little consideration. I felt the short gun snap and deep tailback gave the offense minimal advantage. However, that night I came away extremely impressed with the Zone Read, QB Runs and paralyzing effect the misdirection had on the defense.  While it was easy to see that QB Colin Kaepernick was a special player he also played in a system perfectly suited to his skill set. Chris Ault’s system combined Wing-T, Veer Option and Spread principles to create a powerful run game. Needless to say Nevada games soon began to fill the Schmitt family DVR.

Our offensive staff began to experiment with the Pistol during practice in order to take advantage of our strengths.  We found the Pistol enabled us to better utilize all of our skill while simplifying our blocking schemes. The past two years we have evolved into a base Pistol offense. We are not exclusively Pistol because we feel the need to have additional backfield sets, formations and personnel groupings for different situations we will encounter as an offense. However, the Pistol has become the core of our offense and has been an excellent set to build upon.

The base play in our Pistol offense is the Inside Zone Read. In 2010, we dedicated ourselves to running Inside Zone because our offensive line was struggling. The Pistol allowed us to feature this play from a variety of looks, especially Zone Read Play. The balance the Pistol provides allows us to dress up the Inside Zone from different formations and motions, without giving away our intention. Defenses struggle to cheat their backside ends, OLB’s and alley players to confuse the QB Read because of the possibility of the play coming either way.

The zone read has become the emphasis of our offense and the first concept we teach our offensive line. Instead of teaching a variety of plays we pride ourselves in blocking this scheme to a variety of fronts and pressures.

Over the past three seasons we have been fortunate to have talented Quarterbacks who are able to run the football. Moving the QB out from under center has opened up the QB run game. Each week we include QB Zone, Power, Counter, Power Read and Zone Read plays for our Quarterback out of Pistol. We found that running the QB was going to be a crucial element of our game plan versus top defenses. Some of our biggest wins and most successful offensive performances have featured our QB’s rushing upwards of 15-20 times on designed runs.

The base run play of our Pistol Package is the Zone Read. Numerous teams from the NFL to High School football have adopted some type of Pistol backfield set, but very few of them are running a true Pistol Offense based on the Zone Read. We have very specific goals when running the Zone Read.