For the final case in our Pistol formation special report we wanted to focus on various pass concepts and protections.  We found we had a good deal of inquiries about this, particularly from coaches who wanted to learn more about the Play-Action game.    There was quite a bit of concern about how to use the Pistol back in routes and more importantly how to protect with him being directly behind the QB.  In this case, we planned on addressing some of those concerns, then sharing various concepts that our readers provided.  But in order to stay consistent with our format, we did want to present the advantages of being in a Pistol formation, according to coaches.

Advantages of Being in Pistol

First and foremost, Fresno State University offensive line coach (and former OL coach under Chris Ault at Nevada) told us “the play action pass game is the greatest advantage the Pistol has over off-set shotgun formations.”    Now let’s talk about the specifics behind it.

Ralph Isernia, the head coach at Rensselaer Polytechnic Institute, talked about the advantage of having the back directly behind the QB.  “We have to slide our line the opposite way of the back,” Isernia told us.  “We can slide or man/slide protect in either direction and we can flip protection pre-snap and the defense doesn’t need to know about it. Having him balanced helps us out a lot.  I don’t think we lose a lot by having our QB not get to the four man side because with the style of run game we have with the veer option we don’t see a lot of four off a side.  It’s difficult to defend the option when you’re blitzing that strongly off a side. “

Brian Sheehan, the head coach at Defiance College (OH) and another pure option coach, even talked about the advantage of being in a Pistol formation has towards recruiting.  “It’s a benefit to recruiting now to because now we can tell our QB’s that we are going to develop them in the pass game too,” he told us.  “We’re not going to get into 3rd and Long and run veer pass.  Guys now understand how important a running QB is in the option, but now you present them with a second dimension.  Teams look uncomfortable in traditional long yardage situations and in two-minute drill.  You have to provide kids with the necessary tools to master those situations.  The Pistol does that. “ 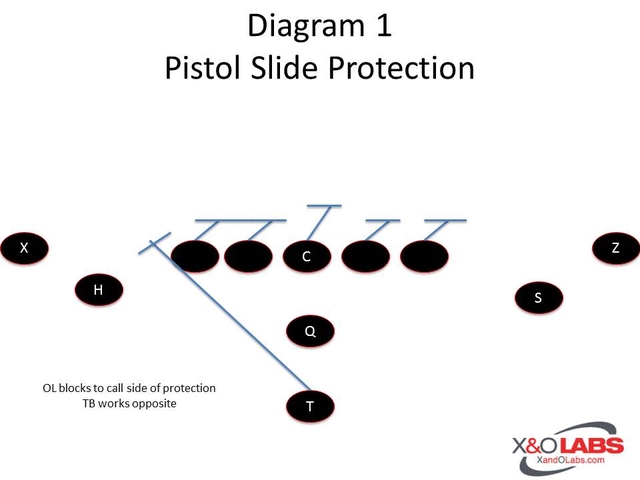 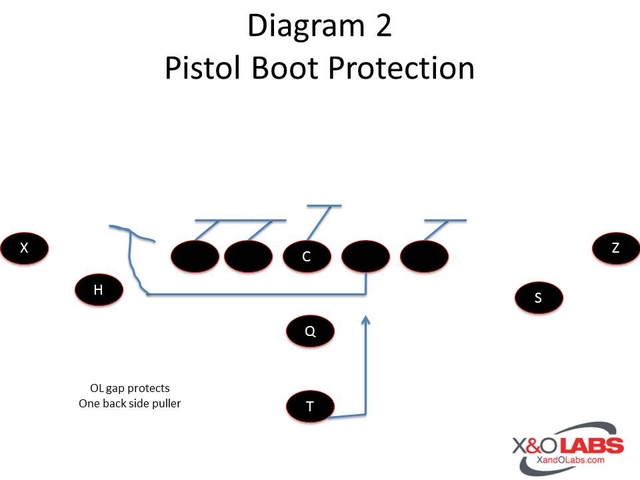 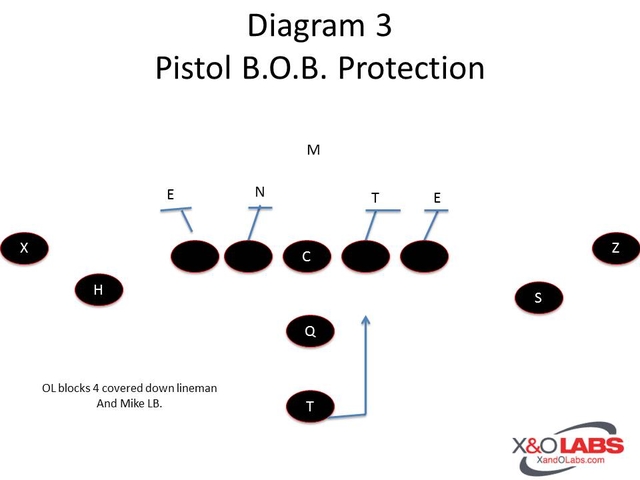 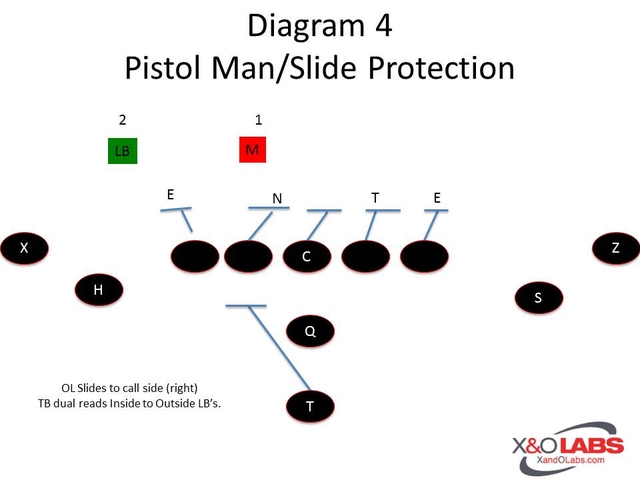 According to Norcross, the half-slide protection must be in direct correlation with the Pistol back’s footwork.  “If it’s a half-slide protection and he has 2-3 opposite the slide, they depart too wide,” said Norcross.  “I see backs are drifting to the B gap.  They wind up on the outside number.  The footwork is wrong on the departure.   We never had a problem with A-B gap plugs.  We coached him up to the tight A gap.  He has to wrap on the first step.  The biggest key was stepping with the opposite foot first.  If you’re protecting to the right, you are going to step with your left and cross over.  Your second one will keep you square and will be the clear step of your QB. “