So, perhaps below is the information many of our coaches were looking for.  Thanks to QB’s like Colin Kaepernick and Robert Griffin Jr., the zone read game out of the Pistol has reached the forefront of schemes most utilized in this formation and our survey only validated that fact.  Of all the coaches that were surveyed, 35.1 percent said the zone read scheme was the number one most efficient run concept out of the Pistol formation in their program this past season. 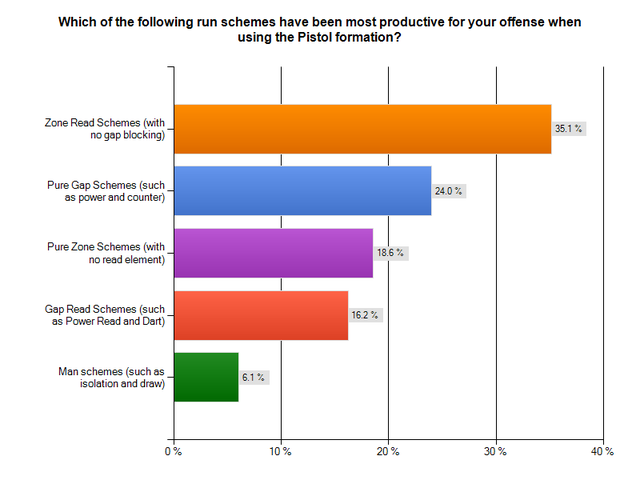 There are many reasons for this, all of which we will explain later in the report.  Before we start to pontificate on all of the various principles and concepts out of the pistol zone read game, we thought it was important to address the various types of options most commonly used in the Pistol formation.

Before we address these various types of option concepts, it’s important to note that based on our research, 66.4 percent of coaches prefer to read the backside 5-technique or C gap player in their read option game.  This is more than any other read. 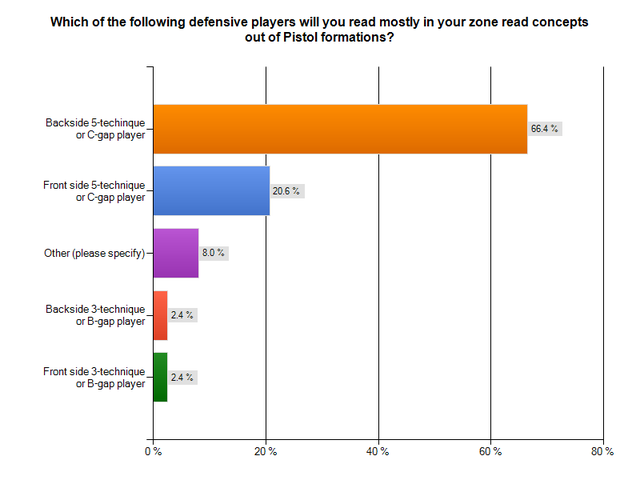 Triple Option Concepts- Triple option schemes involve a third player as a potential pitch player for the third phase of an option.  This player can come in the form of a pure pitch with motion, pure pitch without motion or even a bubble screen variable.  These option concepts could be classified as the following:

We all know the schemes look pretty, but when it comes down to option football, there is nothing more important than the mesh game.  Don’t just take our word for it; listen to some of the more high-profile coaches we talked to for this report.  Whoever we talked to, there was one common thread among teaching the mesh- teach one thing, be consistent and don’t over coach it!   That sentiment was echoed throughout our reporting on the mesh game from the Pistol.  Consider Portland State’s offensive coordinator Bruce Barnum’s quip about how he learned to teach the mesh in his option game.

When Barnum and his assistant Dave Brown first installed the Pistol in 2010 at Portland State, there was much ado about the QB/RB mesh in the option game.  Brown, who was a Graduate Assistant coach working with the running backs under Chris Ault at Nevada, had accessed hours of game film at Nevada and presented it to Barnum.  “I took all of Nevada’s video on Kaepernick,” said Barnum.  They used to talk about jab stepping, stepping to six o’clock, clearing the back, etc.  I turn on the film of Kaepernick and he catches the snap and hops in the air, stops and run the read zone.  I remember thinking this is crazy. “

Of course, Barnum was providing a little tongue and cheek humor, or perhaps just validating the super athlete that Kaepernick is.  But, he was illustrating a fair point:  be consistent.  “As long as the ball is getting deep and the read is long- that’ important,” according to Barnum.  “The last thing you want is that QB sticking that ball straight out because there is no read for that DE and there is no smoke to the mirrors.  It’s got to be consistent.  I don’t care if you jab step and clear.  I don’t care if you open to six o’clock and he screams by you.  We had a freshman last year who would ride the back all the way to the Center.  It doesn’t matter as long as it’s consistent. “

So, as a research company, we did our own validation on this topic and we went right to the source- Washington State running backs coach Jim Mastro- who was the running backs coach under Ault while at Nevada and quite frankly who Cameron Norcross calls the “best Pistol running back coach in the country. “  Since moving on from Nevada, Mastro has helped install the Pistol at UCLA under Coach Neuheisel and now is tinkering with it at WSU under Mike Leach.  Mastro spoke about making sure things are uniformed in the mesh game, particularly in the zone read.  “It’s not like the traditional run game which may be different because different QB’s have different arm lengths,” said Mastro.  “In the read zone game, the running back and QB must be attached at the hip all you will have balls on the ground all day long.”