In this case, we will focus on the base run game concepts most associated with Pistol formations.  Our intent is to detail the play, the specifics of QB mechanics and provide research on new trends of the scheme.  We will not direct much attention to the blocking schemes surrounding each play.  In the interests of time and space, there are other means in which you can go about finding that information.  As we were conducting our research on this scheme, a prominent NFL assistant told us “You can base your entire offense off the Pistol.  I don’t know why many coaches aren’t.”  Well, if nothing else this section will perhaps open your eyes into using the same run concepts you have in the past and marrying them with the Pistol formation.

Washington State University running backs coach Jim Mastro (among dozens of others) told us it all starts with the inside zone, so we will simply follow suit.   We’ve found that 18.2 percent of coaches have had the most success utilizing the inside zone out of the Pistol than any other run concept.  This was second only to Read Zone concepts, which we will address in Case 3.  According to the coaches we spoke with, its imperative to teach the inside zone first because all other run concepts deviate from there.

The number one advantage of being in the Pistol is the downhill run effect it presents to the defense particularly in the zone run schemes.   “The ball gets to the back much faster,” Chris Klenakis, Iowa State’s offensive line coach (and Chris Ault’s former OC at Nevada) told us.  “He has a chance to make a decision quicker for cutbacks.” Another advantage the Pistol gives in zone game is that defenses cannot set their fronts based on the back.  Because the back is directly behind the QB, you won’t see four-down front team set its 3-techinque to the side of the back.  There are no identifiers.  We talked with Cameron Norcross about the benefits of using the Pistol formation and he gave us a laundry list of advantages below:

With all these advantages, its no wonder why the inside zone scheme is so prominent in Pistol formations.  The back is able to stay square for longer, thus making his cut into the line of scrimmage with his shoulders parallel.  The entire philosophy behind the inside zone scheme is to get movement along the front and get lateral displacement for the second level linebackers.  Because the back is able to keep his shoulders squared, it allows him to do that.

As detailed by Norcross above, the Pistol formation hides the mesh point with the QB and RB- a benefit of the offensive structure.   While at Nevada, Klenakis taught the clock system to his QB’s.  “Upon securing the snap the QB opens play side at either four or eight o’clock,” he told us.  “He gets the ball as deep as possible to the back while continuing his boot path opposite.”   Like many other shotgun zone schemes, the tailback is responsible for the mesh, but unlike those traditional shotgun offenses where the back will have to take lateral steps before attacking downhill, the Pistol gets him downhill in a hurry.  “The back takes one lateral step to the play side and gets moving.  He pushes to the inside leg of the Guard and reads the first down lineman past the Center play side but it has the opportunity to be cut back all the way to the backside B gap (Diagram 1). 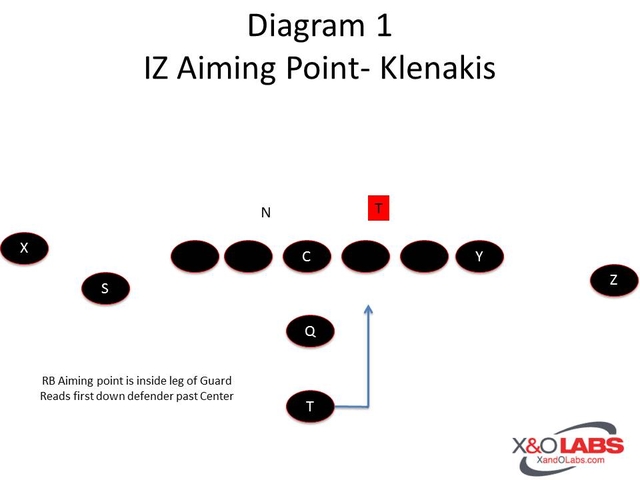 Klenakis admits that when he first installed the scheme at Nevada, he had his backs read the inside leg of the play side Tackle, but now the play has to be hit much tighter than that.  “We started recently to key the inside hip of the Guard,” said Norcross.  “It gets the back downhill quicker and allows him to cutback if needed.”  Reid Evans, the offensive coordinator at Central College (IA) has even modified his reads for the ball carrier to become tighter to the line of scrimmage.  “If it’s zone to the right, our QB steps with his right foot (play side foot) and clears space so the tailback can come straight downhill.  It’s a natural path,” said Evans.  “When we stared out we wanted that tailback to read the front side A gap but we found it to be more natural for him to read the negative or backside A gap and work your way play side (Diagram 2).  If there is a down lineman in the negative A gap that is who will read.  We will read the play side number and try to press it vertical.  If he gets washed on passed, we are behind him (Diagram 3).   In most looks it will be the A gap defender whether it’s the positive A gap, negative A gap or Nose guard.” 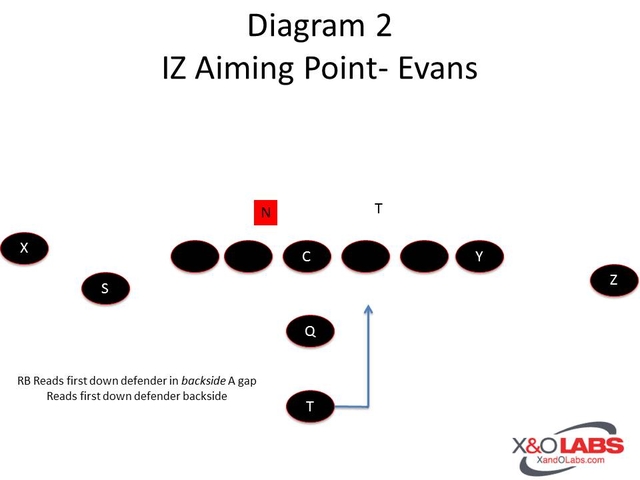 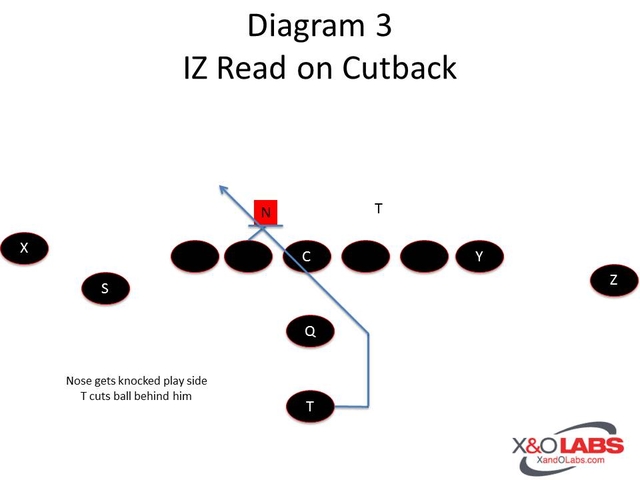 While this is certainly not revolutionary, we’ve found that many coaches are finding innovative ways to seal off the backside edge defender on inside zone schemes.  This concept is most commonly called “slice.”  Patented by Nevada’s former head coach Chris Ault, the slice player’s job is to run the heel line of the offensive line and seal off any threat of a backside tackler.   “He leads with the inside foot and run the heel line,” Klenakis told us.   “He will aim for the inside leg of the opposite Tackle.  He will hit whatever color is on that track (Diagram 4).  Of course, the player that does this can vary from each offensive scheme.  According to our research, 51.9 percent of coaches will use a fullback to do this from a backfield alignment (Diagram 5).   This player can either do this by using pre-snap motion or just by handling the assignment once the ball is snapped.    According to Klenakis, when using motion the ball must be snapped by the time the motion man is at the outside hip of the Tackle if it is a post-snap movement.