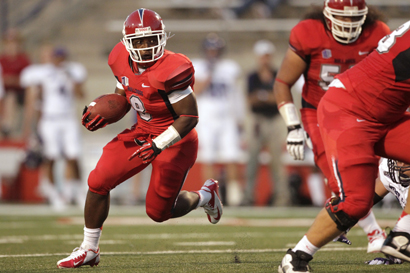 Ralph Isernia, Head Coach, Rensselaer Polytechnic Institute: “From the shotgun, the QB will ‘jump’ the snap and step with his back side foot opposite of the read. He will clear the midline by stepping up and over, away from the read. The step is 2 feet toward the LOS and 2 feet off the midline. Basically, his toes will be on the center's back side foot. After the first ‘Clear’ step, he will come to balance with his back side foot. With his eyes on the read, he will get his shoulders back and extend the ball back to the FB. The FB will take a drop step with his BS foot for timing and run the midline course 100 mph. With inside arm up, he will soft fold over the ball and feel for ‘push-pressure’ from the QB give. His eyes are on his action key (the block in A gap) so he can read the block.”

Matt Sims Colby High School (KS): “To teach the mesh in the Midline scheme. We tell the Pistol back that he owns the line from him to the center. It is the QB’s job to get out of the way. If we are running Midline to the right side, the QB in the Pistol formation will take a 1-yard step toward the line of scrimmage with his left foot at 10 o'clock. This allows him to get out of the way of the Pistol back that owns the line. The QB will then get depth with the ball as he watches his read man. Most times the decision is made before the mesh happens. The QB needs to show the ball keep bent arms and make his read. As the Pistol back runs straight down hill toward the center.”

Joe Whipple, Schalmont High School (NY): “We run our Midline, Veer and Zone mesh everyday for 5 minutes. I paint a line from a cone where the center would be back 8 yards behind the QB and RB. The RB aligns in 2 different positions in all three plays. We first have them run all three through Pistol (RB aligned behind QB in gun) then align him to the side of the QB, as he would run Zone. He is able to run all three plays from both positions and they all look the same. The painted line gives the QB and RB aiming points to where they have to go. The QB is taught to get off the midline. Ideally his heels are in the back side A gap. The RB runs right up the line, which is the crotch of the center. So if he is aligned in Pistol its pretty much straight downhill. If he is aligned next to QB he gets to the line and works up field. The QB does not ride the RB to the LOS, I think it is tough and it makes the defender play both RB and QB. He rides him until he makes the decision to keep or give. We always tell him when in doubt, give.”

Marcus Miller, Englewood High School (FL): “Our midline step rule is for the QB to take his play side foot and put the toe of his play side foot 3 inches perpendicular to his back side foot. His back side foot will naturally progress to towards the LOS, this makes his weight shift forward, but we want his backfoot in the ground as soon as possible because midline is a pull 85% of the time and he will drive off his back foot. After the ride, we push off the (play side) back foot and take two steps and then cut vertically. His mesh point is fast and gains ground to make the DT play it just like he does under center.”
Tim Kilgore, Mansfield Legacy High school (TX): “We run it out of the Pistol. The QB steps back with two quick steps and allows the RB to aim at the crack of center. QB extends ball with thumbs on top and spread fingers on bottom. Teaching their grip during QB school in February, I walk by the QB and try to slap the ball out of their hands. The running back runs his belly over the ball. QB rides from thigh pad to thigh pad and transfer his weight to front foot. This weight shift allows him to take his first step with his back foot without a false step. The QB will take 3 steps parallel to the line of scrimmage before cutting up field. He can cut up quickly if we are cutting up inside of a 5-technique. The RB follows the Zone direction of the center unless he sees daylight in the back side A gap.”