Unbalanced lines have been a big part of our offense for 27 years for several reasons. But, the most significant of the two:

1: Our rival at Paris HS (1992-1995) was Coach Roger Gruneisen's Bourbon County team and they played Cover Zero in their base defense. An unbalanced line gave us an extra man at the point of attack while also putting the FS in man coverage away from strength, who was covering our TE. That gave us a net gain of at least one player and if they aligned improperly, two players.  In fact, our base goal line & short yardage set we still use in 2019 is an unbalanced power I that we created specifically for Bourbon County's defense.

2: Studying Homer Smith's Manual's on football, I became obsessed with numbers, the defense's ability to get defenders across the midline, and the ability of a defense to "fit" on multiple sets.... sets that were unbalanced and unconventional.

Our overwhelming tendency is that we will run to strength because defenses struggle to fit to it and get numbers across the midline. But we have developed a way to attack the weak side that has been successful when defenses are able to do both above.

The unbalanced line also gives us a chance to maximize the use of our best players at the point of attack. On the 3-man surface, we can utilize two offensive tackles and our best guard to have a great run surface. A concept I stole from Coach Alvis Johnson at old Harrodsburg HS in the '80s is to go unbalanced and put two studs (Shon Seibert: TE & Jim Pittman: OL) on the weakside/ 2-man surface side. Watch the defense slide to strength, then hammer them to the weak side with superior personnel. 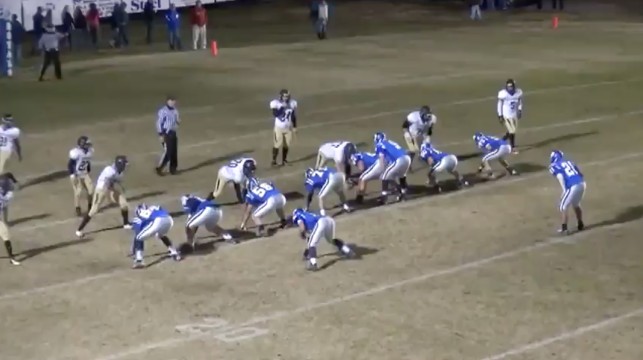 Our favorite play to the unbalanced side is a basic, gap down, off-tackle play. The entire offensive line blocks the inside gap. The fullback kicks out the End Man on the LOS (EMOL). My coaches have teased me about our multiple sets and say all we do is find a million ways to run off-tackle. They are correct.

To the weak side, this concept is a good complement/counter to our off-tackle play. The play side OL (Guard & Tackle or Guard and Tight End) will block their inside gap to the linebacker. The center will block back for the pulling Guard. If the Center has a 0 technique, he will post the NG before he blocks back.  The BS Guard will pull and kick out the EMOL. The BS Tackle will pull and "hug the wall".  He will block the first defender he sees, working inside out. Generally, it turns out to be the play side inside linebacker. Counter Trey to the two-man surface is an A gap play for us. We want to collapse the A gap and have the TB run it tight, so we do not block the outside linebacker. Most of these coaching points come from good friend and former opponent, Leon Hart when he coached at Ashland Paul Blazer HS. Leon was also the OC at Eastern KY University for Coach Roy Kidd during their heyday.

The fullback will block the most dangerous defender backside that is past the defender being blocked by the center. Usually, it is a 4 technique or wider. The 3rd OL to the unbalanced side will rip and try to get to the Free Safety and block him, usually. But his assignment can vary based on a weekly game plan issue. 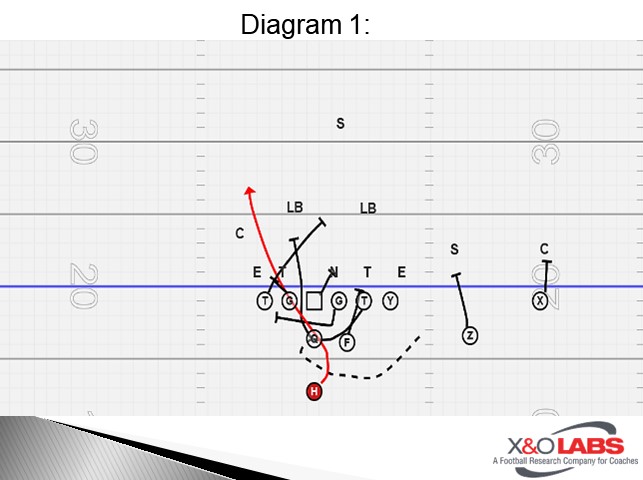 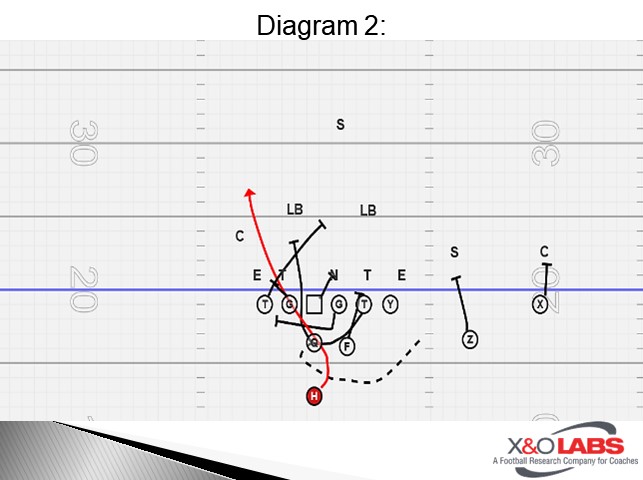 Editor’s Note: Coach Buchanan provided coaching points for each of the video clips below:

Clip 1:  In this clip from practice, we offset the TB to give the defense a different look. We prepped this week for the BS ILB to run through. When the center blocks back, if he runs into a stunt, he must pick up the stunt, or if the ILB plays tight to the LOS.

Clip 2: The left OT gets good movement, allowing the TB to run the ball tight and in the A gap. We don’t have to block the corner who is out of the play.

Clip 3: We have a huge tendency to run off-tackle in this unbalanced set on the goal line. Counter Trey to the weak side is a good complement.

Clip 4: We have a huge tendency to run off-tackle in this unbalanced set on the goal line. Counter Trey to the weak side is a good complement.