Many of the sources that contributed to this special report have flexbone triple option roots somewhere in their background. So, it only makes sense that their philosophy has been grounded in the quarterback run game. Like any option coach, the all-encompassing thought process in their quarterback run catalog is to find numbers and exploit them. This process revolves around building formations to access numbers in the run game. River Dell High School (NJ) head football coach DJ Nimphius is one of those former triple option purists who seek to exploit numerical advantages formationally, but he does so by using overload, or unbalanced formation structures.

The benefit of overload formations is that it forces defenses to react in real time to formation structures they are not used to seeing. And when offensive coordinators couple these formations with motions and shifts it increases the potential of defenders being out-gapped at the snap and losing leverage on ball carriers. This all can result in big plays for the offense.

The Overload Formation Menu for QBR

At River Dell High School Coach Nimphius and his offensive staff begin their formation building around twelve personnel (two tight ends, one back) formations. Coach Nimphius uses that as his jumping off point because it makes the quarterback run game easy to teach. “Now we have four guys (quarterback, running back, two receivers) that can potentially get the ball,” he told us. “We can pull across the formation, set edges, run isolation and pull players. We can block down and kick out. We have three moving parts other than the guy carrying the ball. Then we figure out what is going to cause them problems. For example, if they are an Odd stack team that doesn’t want to come out of it that means we can go into any formation we want and get what we need. I don’t know any defensive coordinator that likes to see two tight ends. If you can start extending the field, that is a good thing.” 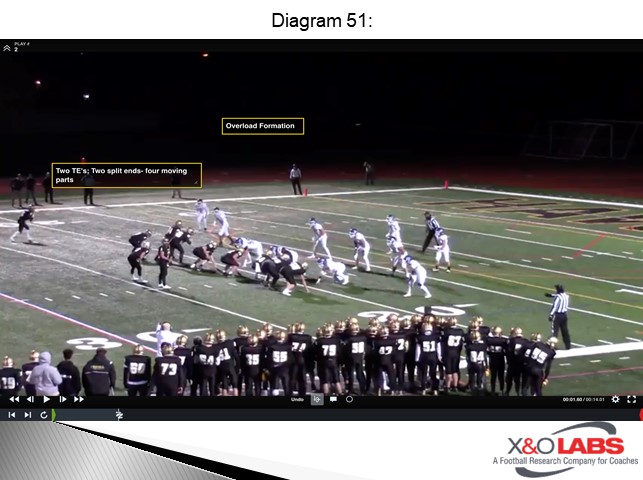 The quarterback run menu at River Dell consist of: inside zone, inside zone read, trap, trap iso (RB leads through), stretch, stretch read, first and second level power read. All of these runs can be checked to the numbers advantage either by the quarterback or the offensive coordinator. It’s something that is repped during the course of the practice week and honed on game day. “If we have numbers the quarterback will run the play,” said Coach Nimphius. The diagram below shows an example of a numerical advantage by the offense. The overload formation produces 8.5 players. The defensive side shows only 6. 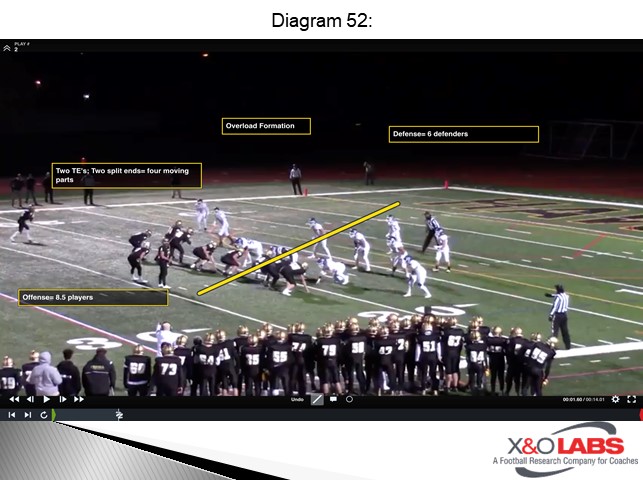 The clip below shows the result of this mismatch. The quarterback checks to a loaded sweep and picks up solid yardage.