Game planning at the high school level is very different than it is for most colleges. In college, coaches have almost too much time during the week to game-plan every detail of a game. Conversely, high school coaches spend their days teaching classes and have a very limited supply of game-plan time. We see that as a difference that needs to be exploited.

Here at Riggs, we decided to make our standard offensive line set an overload, meaning 1 lineman on one side of the center, and 3 on the other. This was our way of forcing Defensive staffs to figure out an alignment and make certain choices that we would look at and select our plays off of. In our first year using this, we were not perfect, but we have decided to keep it for the long haul. Note, some of the defenses discussed may not seem entirely sound to you, but that is the point of the chaos we try to create with our formations. Here is a break down…

Having our offensive line always being in an overload meant that we needed to call them something different. Otherwise, it would be tough to figure out who was who with Guards and Tackles, so we came up with this as our set Offensive Line positions. 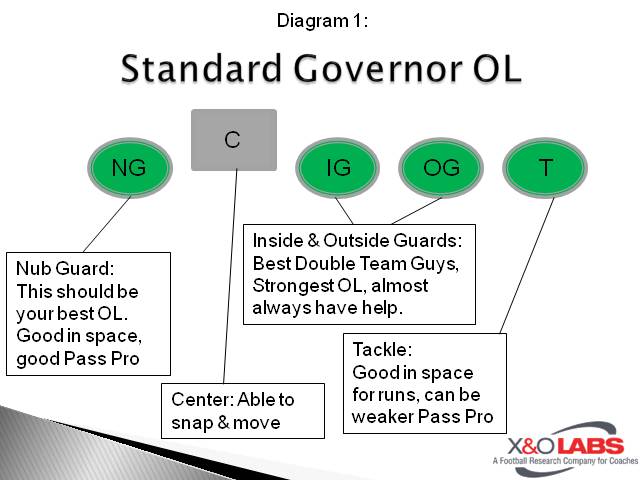 We had our Offensive Line keep between 2-3 foot splits for the most part. We adjusted for some special situations where we wanted tighter splits, but tried to keep them pretty wide to make defenders really have to choose their gap and technique. We did not huddle once this season, so we never had to actually setup a huddle. Our QB called the overload to help them flip when they needed to and was the one who set our tempo. A lot of times when we got in the groove we would try and move faster and push the pace. We weren’t a true tempo team, but really thrived on our ability to push the pace while adjusting to our different formations and limiting our substitutions. The names of our Offensive Linemen will be used throughout the rest of this article.

Knowing these positions, we align the rest of our guys in ways that has the ability to stress both edges. Most defenses would try to simply gap over their Defensive Line and Linebackers. Knowing this, we were able to move the defense one gap away from our short edge and therefore give us a quick edge to get off if we had numbers. On the other hand, if the defense really saw the short edge as a threat, we have a solid run strength to the other side for gap and man games. We started every game with our Overload always adjusting to the sideline to give the short edge to the middle of the field, but if we saw something in game, it was very easy to have the flip or tell them to always be to the field, that part was in-game adjustments for us. Here were our main formations that we used this year. 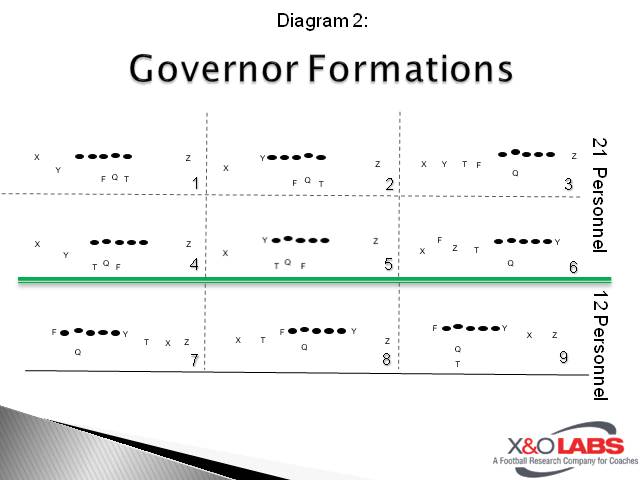 The cool part about our formations is that the Offensive Line and the skills were separate, so we could have every formation with our skills with the Offensive Line Overload going either way, so in a sense we could double to looks we gave the defense without actually putting in twice the formations for the kids to remember. This made it very easy for us to continue mixing up the look we were giving the defense without mixing up our guys and causing any confusion on our end. We are a no-huddle team that mixed tempo throughout the game. By being able to get in and out of these easily, we were able to have a lot of people moving around and making the defense communicate at a high level just to align properly. Additionally, we had one kid who was able to play F and Y, so with him in we were actually able to run every one of these formations without subbing or slowing down if we chose. This made us even harder to predict and was fun to use.

The details for our alignment we tried to keep pretty basic. They are as follows:

We had hand signals for the skills to lineup, and had the QB switch the overload as needed. Being able to keep everyone on the same page and moving fast was critical to our offense’s ability to mix the tempo and either slow down to control clock or push the pace to snowball momentum or prevent the defense from subbing. Now that we have covered our alignment let’s discuss how we got the kids in the best situation to succeed.