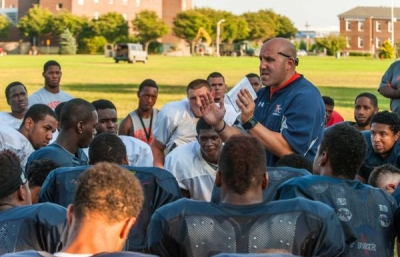 Our "Stack" and "Stack Extend" concept is something we benefited greatly from in our spread no huddle offense in 2015. The alignment and built-in manipulations (RPOs) packaged with our read game allow us to severely stress safeties and overhang players both pre and post snap.
Additional Attributes:

We have the ability, regardless of personnel grouping, to line up in our stack or stack extend configuration at any given point during the game. All alignment communication is signaled in from the sideline.

Make overhang players declare if they want to be a box player and separate safeties outside hashes to be late in run support.