Manipulate the Box with the Bunch Formation Pop Play

A lot of spread teams, like ourselves, are really starting to hone in and perfect the concept of run pass options (RPO’s) and how to utilize them in your game plan and philosophy. After going back and researching the season, we found that we relied heavily on two Bunch play concepts and became very good at executing them over the season. We did balance out our Bunch formation with runs and passes as to not be too easily scouted by opposing defenses, but this article is focused on how we used a 3 option RPO concept out of Bunch sets and a Bunch pass play we have a lot of success with on 2nd and 3rd and medium situations. 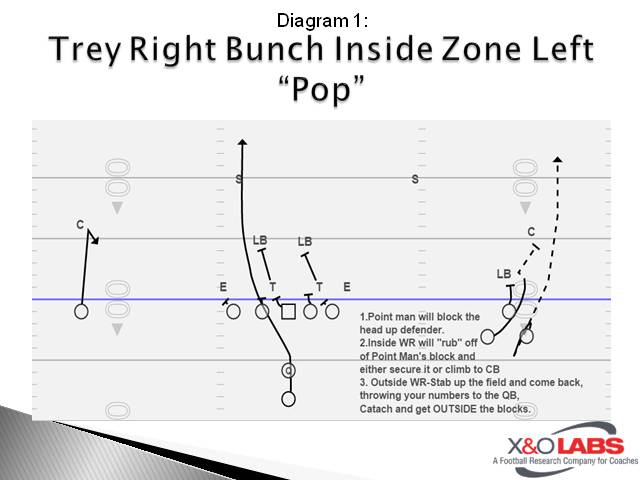 One of the ways we tried to help get the ball in space or at least help us loosen the box for our run game was to utilize the Bunch formation in different areas of the field. You can break down the options/rules into three simple steps for the quarterback, while the ten other players ran the play called no matter what the defense gave them.

One great aspect of the play is the ability to set it anywhere we are on the field. Maybe you don’t have the arm at QB to make the throws across the field. You may also get a glimpse of what the defense will do during your film study. However you decide to set the play, wide or boundary doesn’t change the concept of the play. All the reads remain the same and the QB must be aware of his reads and keys. Set the bunch wide enough to spread the field, but you can still keep them close enough as to not make dangerous throws, an example being if the ball is on the left hash we like to put the bunch on the right hash. 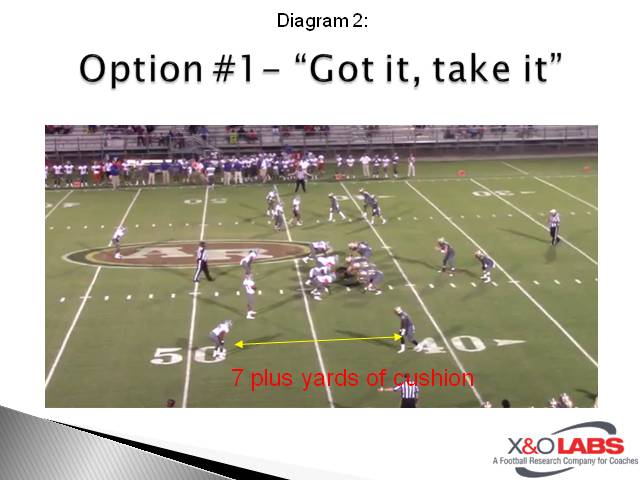 Within the concept of the Pop play, the single receiver has a hitch route. The first read, no matter the run play called, is to see the corner cushion on the reciever to our single side. If we have cushion of seven or more yards and there is not an alley player in a prone position to play the ball, we will throw the hitch route. The quarterback takes a “catch, rock and throw” mentality with the football. The idea is to get the ball out in space to one of our better athletes and have him make a one on one play. The odds are in our favor that the play will result in at least 5 yards with the high percentage that it will result in more. We always would rather have a corner trying to make a tackle than any other defender on the field. If the cushion is within five or less yards, or the alley player is in a dangerous position pre snap, we will take a look to our next option.