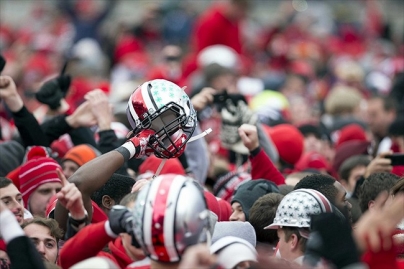 Researcher's Note: Chris Ash is now the defensive coordinator at the University of Ohio State.  in 2012, while he was serving as DC at perennial Big Ten contender University of Wisconsin, he sat down exclusively with X&O Labs' Senior Research Manager Mike Kuchar and spoke specifically his call system and how he adjusts his fronts and coverages to specific formations.

MK: When you break down opponents how much of it is formation as opposed to personnel? Do you get more of a beat on what they do on 2x1, 3x1, 2x2 etc.? Or is it more about which personnel they have in those combinations?

MK: Will you have separate checks against those combinations or will it be mainly against the type of personnel?

CA: When teams give you multiple formations out of the same personnel grouping we have a check system that we use. Some teams do a great job of running plays with their QB under center then they move their QB in the gun and it’s a different deal. We have a check system against plays with the QB under center and when the QB goes in the gun we have another certain package that we’ll be in. Let’s say there is 11 personnel in the offensive huddle or on the sideline huddling up. You don’t know what kind of picture (personnel) they will come out in. They can come out in 11 personnel pictures, 10 personnel pictures, 20 personnel pictures with the tight end or wide out in the backfield. We teach our players pictures, they understand the pictures and they understand which coverage’s we want to be in based on those pictures. We have a communication system that will allow us to get to that.

MK: How many coverage checks will you have based on those pictures?

CA: It depends on opponent. Pretty much, certain formations like 2x2 with the TE in the core, we’ll play certain coverage. 2x2 with no TE, our coverage will adjust. 3x1 with a tight end vs. 3x1 with no tight end we will adjust differently. When we get to a 20 personnel picture we have to know how we will check. Based on the game plan, they have to know they are going to adjust vs. a 20 personnel picture. They will check to it automatically. We play 2x2 one way and 3x1 two different ways. 20 personnel pictures we may play one way. Our guys need to know what they are going to be in.

MK: I realize that 21 personnel pro sets are disintegrating in the Big Ten, but will you still play with two-high against those sets?

CA: Against two back run game or pro sets we will not be in two-high coverage. We will be in an eight-man front and bring one of our safeties down into the box and play with a single high safety. It’s a part of our check system. Now, if they run a pro style offense when the QB will get in the gun, we may play a different coverage- we’re yelling "gun, gun, gun," and we’re playing some type of cover four. We will play an under front or if the ball is on the hash, we’ll make a field call where we set our Nose and Sam to the field. (Diagram 1). 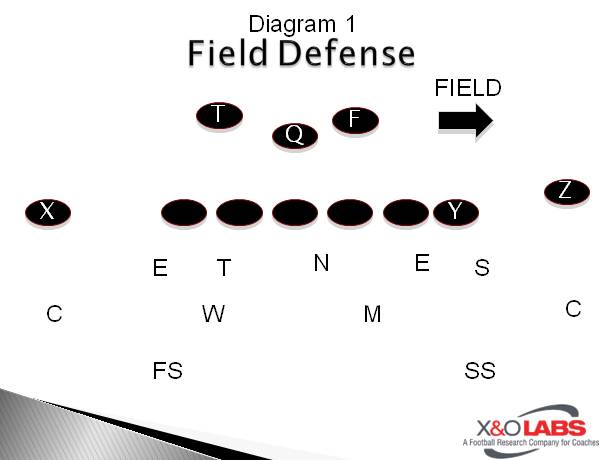 MK: Coach, now I’d like you to take us through your game planning against formations. What is the protocol you use in defending these specific formations? Let’s start with 2x2 open gun formations (Diagram 2).

CA: 2x2 open you have to look at where the back is and what they do out of that set with the back. Is the back deep? Is the back even? Is he wide, etc.? What does the back tell you? Is the back offset to the field? Is he offset to the boundary? Is he in pistol? You have to identify what they’re doing out of each of those backfield sets. The level of the back tells you a lot of information. If the back is to the field, and he’s flat, many teams will not run the power read scheme with him into the boundary. There are certain things we can do with our front four to negate any of those runs. We don’t any zone read with the back even with the QB these days. The only thing we’re getting with that is the power read. The zone read and veer option comes with the back deep. 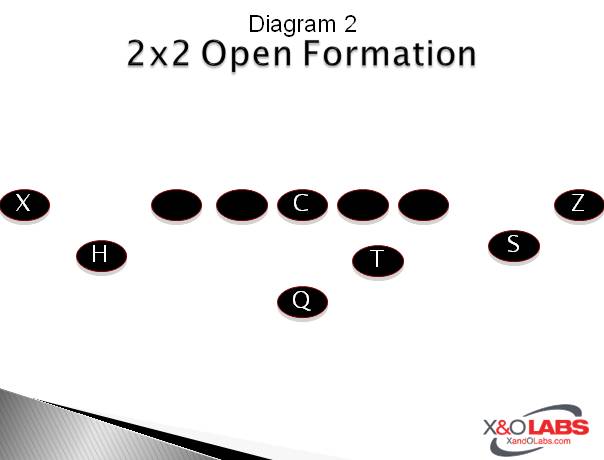 MK: How about 2x2 formations with the TE closed (Diagram 3)

CA: We don’t see much zone read out of that anymore. We see tight end side power, which could be an issue when you got crack schemes on a safety. We see stretch plays with crack issues. The zone read to me is not the play of choice for spread offenses out of that formation. When I study it, that backfield set shows more tight end side run game than anything else (Back away from TE). I guess their trying to get your backers to cheat weak because of the back set but there is so much TE side run game. That’s what you’re trying to study. Sure, that’s the backfield set, but what are they really trying to do out of it. In the old days it would’ve been nothing but zone read but in today’s offenses it’s certainly not the case. 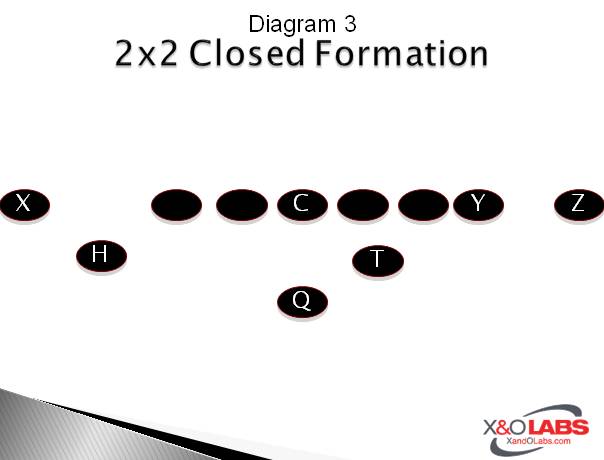