Editor's Note:  After leading both the University of Florida and the University of Illinois football programs, former head coach Ron Zook has taken what he plans to be a one-year hiatus from coaching before he returns to the sideline.  This off-season, he spent some time with X&O Labs' Senior Research Manager Mike Kuchar discussing what he’s earned his stripes for as a defensive coordinator - the inns and outs of brining pressure.

Part 1: Elements of a Pressure Defense 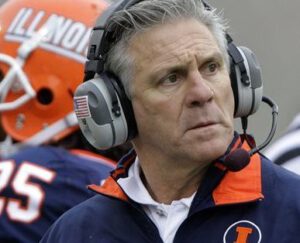 MK:  Coach, can you talk briefly about your philosophy on bringing pressure?

RZ:  Systems nowadays have to be adjustable enough to adjust to your personnel.  One of the things I learned from Frank Beamer when we were together at Murray State is that when you’re getting after people, kids enjoy it.  They have fun.  There is no more read and react defense anymore.  You’re attacking.  Your defensive players are now on the offensive and they have fun doing it.  You have to be smart in what you’re doing by not giving up big plays, but he changed my philosophy defensively.  Football is an emotional game and you need to play with intensity.  Bringing pressure lets you do that.

MK:   How do you develop the "blitz makeup" of your defense?

RZ:  We always talked about what we called "blitz attitude."  If you got people that are pressuring, they have to beat blocks to do so.  If you’re asking a linebacker to beat a running back - he needs to beat him.  It’s the same as a defensive back beating a wide receiver. We didn’t want to get beat.  When I coached the secondary, I always taught from a man coverage point of view.  If you can play man coverage, than you can play zone coverage.  What you’re doing in zone pressures is giving up a certain area of the field while attacking protections.

MK: What is your preference when designing zone pressures?  Which kinds of pressures are you most comfortable with?

RZ:  When you bring five people there are two things you can do: you can play a three deep three under principle like what Dick LeBeau and Dom Capers are known for by trying to get a guy free.  You’re trying to force an offensive lineman who is normally blocking a first level defender who then drops off.  This gets a guy coming free.  The QB’s are so good in the NFL and now in college they are going to get their line in the best protection.  You have to make the QB read on the run.  We got into the two-deep zone pressures while I was coaching with the New Orleans Saints.  I used to coach Joe Johnson who at the time was the best defensive lineman in the NFL.  We used to run our zone dogs and drop him in the flat.  So one day he turns to me and said, ‘look you’re paying me five million dollars to rush the passer not drop back in pass coverage.’  I told the head coach he had a point.  So we got into the two deep zone pressures to let our DL rush the QB.  You’re still bringing five defenders, but now you’re bringing the  four down and a second level player.  In college, we couldn’t play both three deep and two deep pressures because we didn’t have enough time to teach it.  If you teach everything from a man point of view- where you’re teaching where your eyes need to be and your leverage- you can teach any zone coverage.  Playing three deep and two-deep changes how you play the corners and safeties but it all depends on how much you can do.  If you choose to do too much, the less productive you will become.

MK:  How many pressures will you go into game week with?

RZ:  When I was in the NFL we had a whole bunch.  In college we may have 8-10 but they were "same as, same as" meaning that we had a lot in the repertoire, but you need to work the ones you are going to use the most.  You’re really putting in pressures to attack protections or take advantage of personnel that you may be superior than.  The ones you practice the most are the ones that are most successful.  I had to teach myself that less is more because that’s what your guys know in the heat of the battle.

RZ:  I learned this at an early age at Murray State.   We had a terrific safety that could blitz and cover, so we used him.  The next year we didn’t have those same abilities.  So just because a pressure is good at one place, it doesn’t mean that it will work everywhere.  It’s all about putting your players in position to be successful- at any level.  Your systems must be flexible enough to put players in position to make plays.  Players will be more comfortable in doing their job that way.  If you have a guy that has a knack for getting off the ball, making guys miss and making plays on the QB, that’s the kind of guy you want to get free.  More often than not, that’s when you’re changing your blitzes from week to week.  For example, you may want a safety coming through the A gap or B gap based on the protection to get him free.

MK:  What are some proven indicators in determining pass protection when bringing pressure?

RZ: What you try to do is get an overall feel for their protection.  From there, you can disguise your coverage or your front where you can get their offensive line confused.  It’s fun to blitz- let those guys move around. Is the offensive line sliding?  Are they working a five-man protection?  Six man protection?  Go back and study the blitz reel of your opponent.  Once you see this, you can determine where the QB is trying to go with the football.  Find out where his hot reads are.  It’s easy to see if the back is free releasing or checking.  How do you get them to slide their protection?  It usually starts where the Mike LB is or where the center is counting from.  You try to disguise him that way.