Researchers' Note: You can access the raw data - in the form of graphs - from our research on the zone pressure concepts against spread teams: Click here to read the Statistical Analysis Report.

Case 1 – The Prevalence of Boundary Side Pressures After extensive research on the topic of zone pressures, X&O Labs (www.XandOLabs.com) has discovered that the majority of football programs blitz more to the boundary than to the field or to open or closed offensive sets.  Over 31 percent of coaches polled at all levels of football have professed that their most successful zone pressure package is one that attacks the boundary side of the field.   In fact 71 percent of coaches polled that elected to blitz more from the boundary had a winning percentage of 70-79 percent.  This is no coincidence.

According to our studies, a zone pressure from the boundary is disguised more easily and is difficult for opposing QB’s to detect.  Fifty-two percent of our coaches employ a three-under, three-deep zone principle in their pressure packages.  When a coach employs a zone pressure with one deep safety, many teams will show a two-deep shell pre-snap to show disguise.  Either pre or post-snap, one of those safeties will rotate into the flat area.  When a safety rotates to the field side, it is easier to identify by the offensive line and the QB.  The boundary side presents a completely different issue.

On most occurrences, the boundary side corner is the active blitzer in these schemes.  Based on responses, the most common scheme was the Boundary Cobra (Diagram 1).  Here, the blitz is instituted out of a four-down, field under front, where 3-technique tackle is set to the boundary.  The corner comes hard off the edge as the force blitzer while the Rush end and 3-technique slant away from the blitz.  Out of a traditional three under, three deep coverage rotations, the weak side LB will play hot to #2, the Mike LB is hot to #3, while the free rotates to play the final #1 to the blitzing corner side. 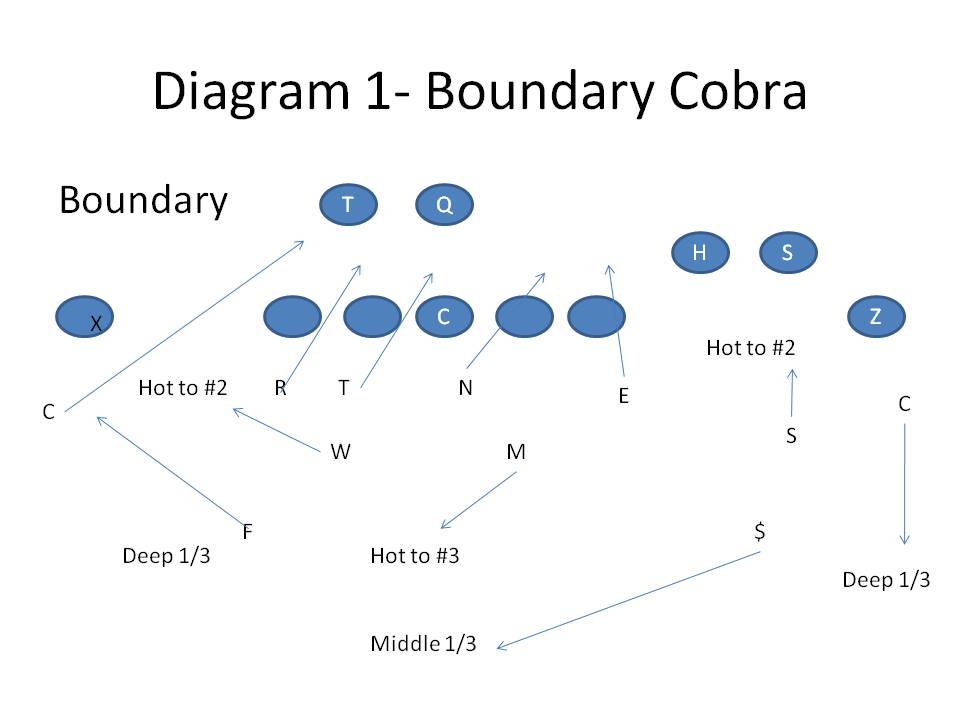 The second most common boundary pressure according to our research was simply called "Lava" by our analysts (Diagram 2).  Lava is another corner blitz, but mainly used when offensive teams will displace their tight end to the boundary.   Now the offense has presented a three-man surface, so an extra gap needs to be accounted for.  Sixty-two percent of the programs surveyed, ran the "Lava" package out of a 4-2-5 defensive structure.  The corner still comes off the corner and is responsible for any pitch on option.  The weak side defensive end must run to get under #1 receiver on the snap while the strong side LB (M) runs into the C gap.  The weak side LB (W) rushes the weak B gap.  The Nickel (N) executes what coaches referred to as a "bang and slip" technique to collision any number two receiver to the field side.  The strong safety (S) must get to deep third immediately to cover the final number one receiver.  The blitz side defensive end will play the hot to #2. 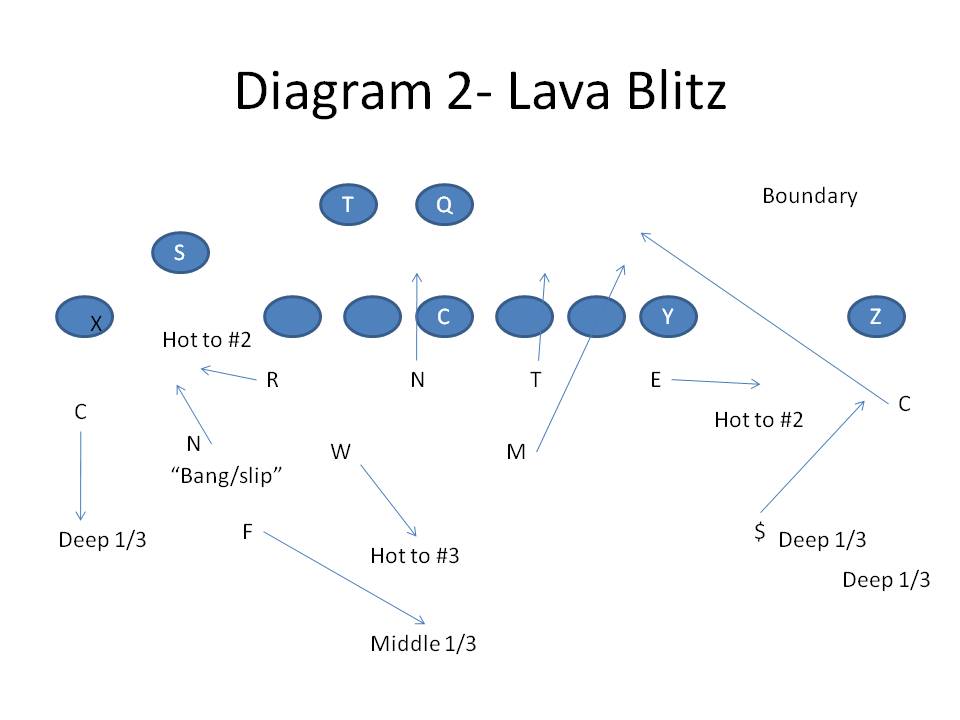 While the Cobra blitz package was a productive pressure for our coaches, its limitations lie in sending three weak to the boundary side.  In order to get a four man pressure to the boundary side, our coaches dialed up pressures out of the four-down front to send the weak side LB and the Mike LB (Diagram 3).  The weak side defensive end is off the edge, while the Will crosses into the A gap and the Mike scrapes into the B gap.  Will is the penetrator and the Mike is the looper, with the Will going first.  The corner plays deep third while the free safety rotates to play hot to #2.  The strong side LB (Sam) will play hot to #3 or the middle hole defender.  Again, this pressure is ideal to a two-man surface where team will often have just two gaps presented (A and B gap).  The nose executes a RAC (rip across center’s) face to clear room for the Will.