Teaching Contain, Chase, Inside and Outside Blitz Angles 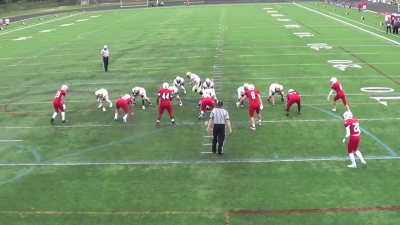 Executing a pressure can be difficult. With all of the different pressures that we run it could become difficult for the players to know their blitz responsibilities. So, we came up with four different type of blitzers: Contain, Chase, Inside & Outside.

A contain blitzer is a blitzer off the edge. This type of blitzer will force the ball to the inside. The blitzer should have his eyes on the EMLOS to the deepest back. His aiming point should be the deepest back in the backfield. This angle will help set the edge behind the offensive line and condense the play. The blitzer should attack the edge of a blocker and keep his outside arm free. 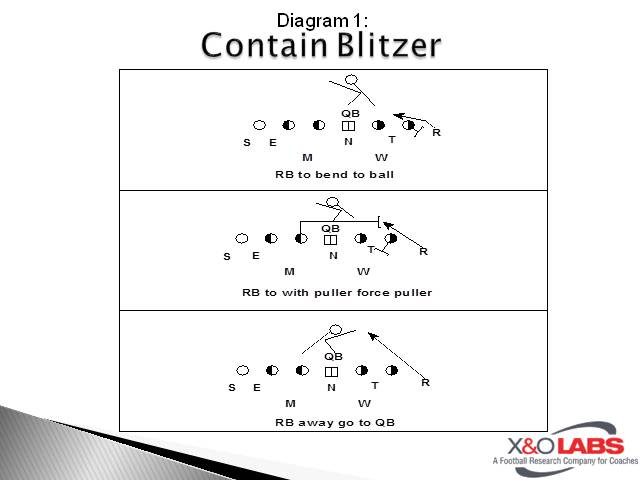 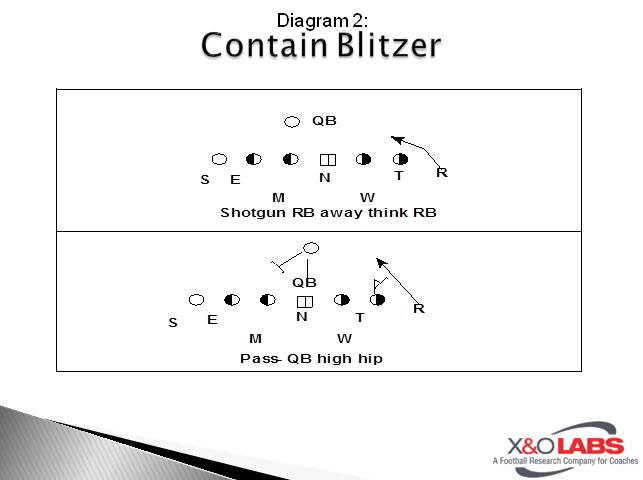 Chase blitzer gets a base, reach or pass set then becomes a contain blitzer. This blitzer gets a veer block then close flat and play running back. When closing flat, spill all flat pullers and all deep pullers redirect for late contain. The nice thing about the chase blitzer you are never wrong as long as the player reacts to the block properly. 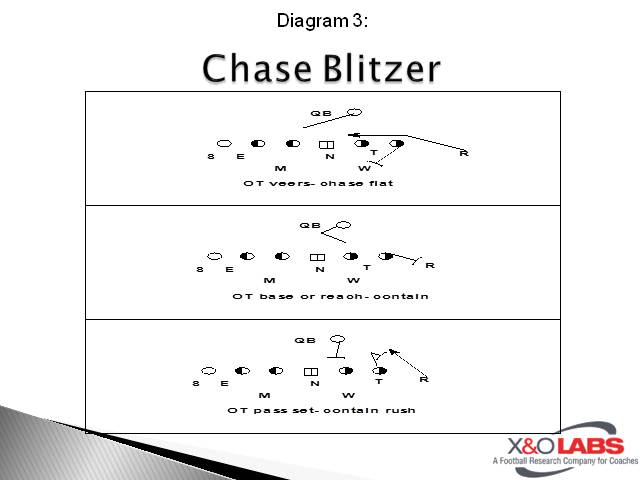 The contain blitzer must understand his rules in order to execute the technique properly. Type of technique the blitzer uses is based on the block he gets from the EMLOS and ball carrier. The blitzer gets a reach or base block with run to, should attack the outside edge of the blocker while getting knock back on the blocker. Blitzer gets a veer block by EMLOS he should start to squeeze toward the veer block eliminating the space and make sure the blitzer doesn’t get to far up field and create vertical seam. Veer block with run to the contain blitzer should look down the LOS for pullers if a puller comes be ready to force the puller by giving the tip of inside shoulder to puller. Blitzer should keep his inside foot up just in case the ball bounces outside it is easy to rip off the block and redirect outside to make the tackle. Veer block with run-away the contain blitzer should attack the QB’s up field hip to check for boot or even a reverse. Contain blitzer gets pass block work the edge of the man don’t counter unless pass QB depth. With pass rush like the contain blitzer to beat with speed and use different rip moves and bull rush as a changeup.